Replacing SARS with SWAT will not address police brutality -UN 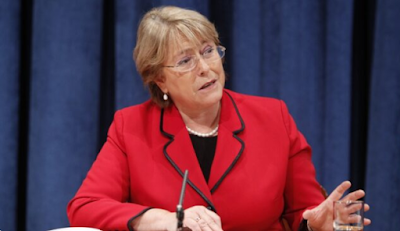 Michelle Bachelet, the United Nations high commissioner for human rights, has faulted the manner in which the Nigeria police force set up special weapons and tactics (SWAT) to replace the special anti-robbery squad (SARS).

Bachelet said the police swiftly created SWAT “without first addressing some of the root causes of police violence and putting in place sufficient safeguards to prevent future violations.”

She also said “there have been few if any charges” against former SARS operatives “despite abundant evidence” against them.

Mohammed Adamu, inspector-general of police (IGP), created SWAT after disbanding SARS over allegations of human rights abuses as a result of undue profiling and stereotyping.

Protests against the anti-robbery squad, however, continued under the #EndSARS movement which metamorphosed into agitation for improved governance in addition to justice for victims of police brutality.

On Tuesday, soldiers shot at the protesters while camping at the Lekki tollgate, leading to the death of 12 persons, according to Amnesty International.

In a statement condemning the security clampdown, Bachelet called on Nigerian authorities to “deal decisively with the underlying problem of persistent violations committed by the security forces, and make a far stronger effort to bring police and army personnel guilty of crimes against civilians to justice.”

“While the number of casualties of yesterday’s shooting at the Lekki toll plaza in Lagos is still not clear, there is little doubt that this was a case of excessive use of force, resulting in unlawful killings with live ammunition, by Nigerian armed forces,” she said.

“Reports that CCTV cameras and lighting were deliberately disabled prior to the shooting are even more disturbing as, if confirmed, they suggest this deplorable attack on peaceful protestors was premeditated, planned and coordinated.”

The UN high commissioner added that the rights of Nigerians to peacefully protest must be respected, describing the reported killings in Lekki as “adding fuel to a fire that was already starting to rage out of control.”

Bachelet said the way to restore trust and bring back peace to the streets of Nigeria is for the authorities to take immediate concrete steps to show they are genuinely committed to tackling impunity, after years of inaction.

“There need to be immediate, independent, transparent and thorough investigations, not just into last night’s killings, but also into all the previous violations committed by security forces,” she said.

“Those appointed to carry out such investigations must not only be independent and impartial but must be widely perceived as such.

“And, where sufficient evidence already exists to warrant charges, immediate suspension of officers – including senior officers — suspected of committing serious crimes, should take place long before the conclusion of such investigations.”