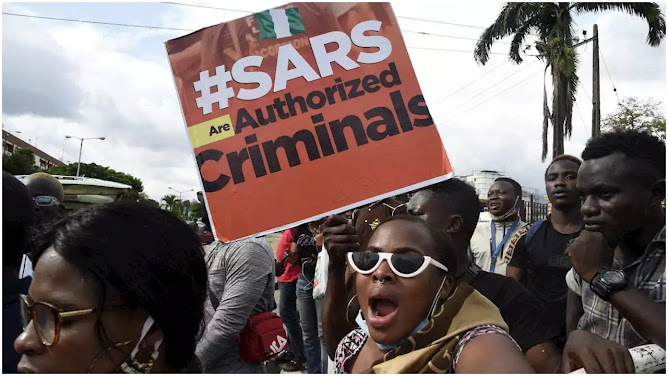 The agitation for Police reforms continued nationwide yesterday, with the #EndSARS protesters this time also calling for an end to the Special Weapons and Tactics unit, SWAT, whose creation was announced by Inspector-General of Police, Mohammed Adamu, on Tuesday.

The IGP had said SWAT would immediately take the place of the now-disbanded SARS to tackle violent crimes in the country, but the #EndSARS protesters would have none of this, contending that the new unit was SARS in another form.

I could swear the Police already had a SWAT team. Google to make sure and found this tweet from September 2019, one of the protesters tweeted yesterday. Another protester also sent tweets of a SWAT personnel sitting with a  machine gun at the entrance of Rivers State collation centre in Port Harcourt on February 26, 2019, backed by pictures. The Police, however, countered this argument with what they described as five facts about  the new tactical team ‘SWAT. They are: No personnel of the defunct SARS will be selected to be part of the Tactical team

The protests which entered the eighth day yesterday spanned Lagos, Abuja, Awka, Warri, Abeokuta and other parts of Nigeria where it had persisted. This came on a day Amnesty International in its twitter handle, said no fewer than 10 #EndSARS protesters had been killed by the police since the protests started.

However, the thousands of protesters who defied yesterday’s downpour to join the nationwide protests in Alausa, Ikeja area of Lagos were taken aback as some hoodlums hijacked the process, attacking protesters and road users. The incident occurred at about 4pm as the protesters marched in-between Alausa and Lagos/Ibadan Expressway.

It was gathered that before the protesters could comprehend what was happening, the hoodlums had succeeded in snatching cash, smart phones and other personal effects. Protesters ran helter-skelter. Recovering from the shock of the attack, the protesters regrouped and gave the hoodlums a hot chase. While some of the hoodlums were able to escape, four were not so lucky as they were apprehended and handed over to the Police. Narrating his experience, one of the protesters, Abdulahi Kazeem, said the attack came at a time they least expected it.

He said: “We had all relaxed since the Police were monitoring the protests, alas! The Policemen stood aloof and watched the scenario. If we had not launched a counter-attack, many of us would have landed in the hospital.” According to him, the hoodlums came with matchets, cutlasses and broken bottles to attack them, thereby disrupting the peaceful protests.

The protests, which started at about 10:00am, was more of a carnival.  Protesters at Lagos State House of Assembly, Alausa, Ikeja, rendered the National Anthem to kick-start the business of the day, as they were entertained by some Disck Jokeys (DJs). While the protest was on, some Nigerians reached out to the protesters in cash and kind. National Coordinator of Education Right Campaign, Hassan Taiwo Soweto, said the protests won’t be called off until their demands were met.

“We are tired of fake promises by the government and we shall ensure the promises made during these protests are kept,” he said; Similarly, protests were held in VGC, Lekki and Sangotedo, as major roads in the axis were blocked by the protesters who were supported by popular musicians, artistes and songwriters in the state. As at 11am, the gridlock caused by the protest had stretched from the Admiralty Way to Abraham Adesanya, Lekki Phase 1 and environs. Also, the alternative route witnessed influx of vehicular activities due to blockage of the major roads and shut-down of the toll gate on Lekki-Epe expressway and Lekki-Ikoyi bridge.