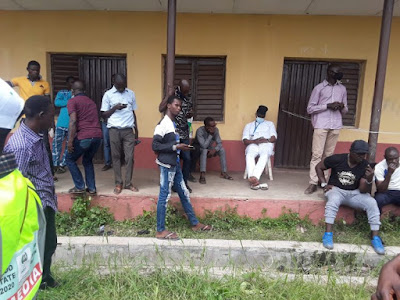 Eyitayo Jegede, the candidate of the Peoples Democratic Party, PDP has refused to leave his polling unit nearly three hours after he voted.

Jegede, who arrived at the polling unit situated at his ward 1, unit 9 polling unit at Gbogi/Isokan Sacred Heart Primary School just before 9 am stood on queue alongside Enoh, his wife for over two hours before he cast his vote.

However, it was gathered that after he returned home, he got information that some security operatives came to his polling unit and asked everyone to leave.

This was after voting had ended and some of the voters were waiting for the official 2.30 pm end of voting time to begin the counting of the ballots.

Some of the voters had alerted Jegede whose house was just few metres away from the polling unit out of fear that the police action may be a plot to substitute the already printed ballot with another ballot papers brought in from somewhere else.

Jegede rushed back to the polling unit and he has been sitting in front of one of the classrooms waiting for the commencement of counting of the votes.