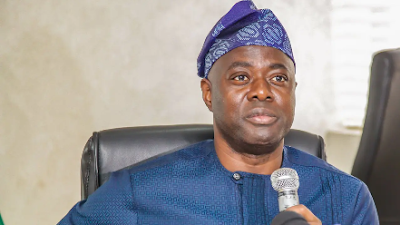 Makinde is the Chairman of the Peoples Democratic Party (PDP) National Campaign Council.

On Sunday, he vowed that the party would prevent the All Progressives Congress (APC) from using violence to truncate the will of the people.

He spoke after a meeting with the Assistant Inspector General of Police (AIG) deployed for the election and the Commissioner of Police.

Makinde appealed to PDP supporters to remain resolute in their preparedness to vote en-masse for Eyitayo Jegede, the governorship candidate.

He advised security agencies to be neutral and expressed confidence that the APC would be sent out of the Government House in Alagbaka on Saturday.

In a statement by his spokesman, Taiwo Adisa, Makinde said the PDP and its flagbearer have been working hard to convince the electorate on their programmes.

He pointed out that the Governor Rotimi Akeredolu administration has brought hardship upon the people.

The governor added that the ruling party has shown desperation to retain the state despite its failures.

Makinde vowed that PDP would not sit idly and watch the APC harass the electorate.

He insisted that the opposition and Jegede have run an issue-based campaign.

“The APC led administration has brought their characteristic pain and suffering upon the people of Ondo State. And the people have decided it is time for them to go. However, we have noticed how in the past few weeks, our supporters have become targets of violent attacks from APC thugs,” he said.

Makinde recalled the attack on PDP campaign train at Akoko and the subsequent ambush at Irele.

He regretted that Jegede was held hostage and nearly prevented from entering the town.

The PDP campaign leader also condemned the shootings at Owo and latest skirmishes in Akure, the state capital.

Makinde accused the APC of acting as if holding on to government is more important than securing the lives of indigenes and residents.

“They are willing to set Ondo State on fire if that is what it would take for them to retain Alagbaka. We will not sit back and watch our supporters, and indeed any of the electorates intimidated. We will use all legal means at our disposal to ensure that our people are safe. We appeal to them not to allow the threat unleashed by the APC to affect their resolve.

“We must all come out on October 10 to send the APC and their representatives out of the Government House. You must all come out, vote and defend your votes. As my good friend and our candidate Eyitayo Jegede would say: ‘We are more than them. We are much more than they are.’ We cannot allow them to silence us,” he added.

Makinde commended the Police for providing security for Jegede.

“History and posterity have never been kind to anyone who allowed themselves to be used as a tool for injustice. We urge you to read the mood of the people and act accordingly. Politicians may come and go, but the people will always remain. Remember, the world is watching”, he told the AIG and the CP.