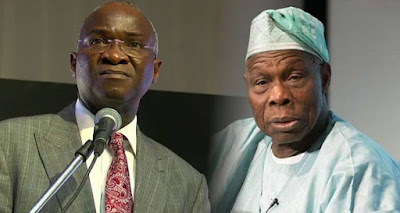 Nigerians have descended heavily on Minister of Works and Housing, Babatunde Fashola for  blaming former President, Olusegun Obasanjo for using Paris Club’s $12 billion debt cancellation to pay the nation’s creditors rather than using the fund to build roads and rails.

Fashola had in a interview on Channels TV blamed Obasanjo, as partly responsible for Nigeria’s weak infrastructural base, saying that instead of paying off Nigeria’s external debts, the ex-Nigerian leader should have invested in capital projects across the country.

According to Fashola, previous governments that had access to a lot of money, under-invested in the country’s infrastructure, saying if he had the $12 billion, like the Olusegun Obasanjo government in 2005, he would have built rails and more roads.

In 2005/2006, the Paris Club wrote off $18 billion or 60 per cent of the $30 billion Nigeria owed the cartel, after months of negotiations, a development touted as one of the biggest achievements of the Obasanjo administration.

Fashola said that rather than deploy the funds prudently, the Obasanjo government decided to pay the country’s creditors to the detriment of the country, insisting that today, Nigeria has gone back to borrowing because the governments in the past ignored investment in infrastructure.

Nigerians on twitter attacked Fashola for questioning Obasanjo’s ingenuity in using the money to pay creditors.

Fashola is currently trending on twitter for the wrong reason.

A user, Mukolu Lukas said the day Fashola decided to follow president buhari, that was when his brain was twisted, saying that instead of now thinking forward, he is now thinking backward.

Emeka Anene said Fashola should have completed the Lagos Metro line, and that instead he folded his arm blaming Obasanjo.

What's wrong with Fashola? The Fashola I know doesn't reason like this. Something is wrong.

Fashola can't be this daft!
From a suppose intellectual, this is nonsense.
Someone did his best and got $12bn cancelled with the belief that the money that would have been used to keep servicing this lofty debt can channeled into other ventures like provision of infrastructures. https://t.co/wfWtFSWa5s

The same Fashola that promised to fix Nigeria's power issues within 6 months?
Nothing surprises me anymore from these folks. https://t.co/CVfWh2xi6x

Fashola said Nigerians are disappointed because they are looking for results in the wrong place(fed. govt). Let me also reamind him that the fed. govt. controls more than 50% of the resources in this country. It's fair to look up to them. To whom much is given, much is expected

Another disappointment from Fashola;If OBJ had used the money to build roads and other infrastructures,would Pmb have gotten loans so easily to embark on projects they are doing today and would things not have been much more difficult for us today?

Whatever happened to Fashola? Very worried that a senior minister cannot comprehend opportunity cost.
We were offered $12bn for 30bn. Effectively a gift of $18bn he now thinks we should have forgone. I hope this kind of reasoning isn't driving our current debt management. https://t.co/L860MLmXgJ

Obasanjo Should’ve Built Rails, Roads, Instead of $12bn Debt Cancellation.
- FASHOLA
I totally agree with this! The $12bn could have worth trillion of infrastructural assets today#AOO

Fashola is telling you Nigerians that Nigeria is heading for a debt default.

Debt servicing to revenue is 99%, obviously we can't sustain it.

When Nigerian politicians openly support nonsense, think about the worst that could possibly happen.

Fashola has become the "Nza bird that has challenged his chi to a wrestling match." His foolishness is questioning the wisdom of the former President Obasanjo in settling our debt of $12bn. His wisdom cannot query the unaccounted borrowing and stealing in this administration. https://t.co/EtjcHpnS4O

Now they are even blaming OBJ-Atiku for making Nigeria debt free, since debt is their only stock in trade. Please can Fashola give a road or rail they working are working on that was not initiated by OBJ-Atiku and continued by GEJ ?! https://t.co/M9JxOaPkpO

Nigerians are complaining that this regime has plunged the country into debt trap.

Fashola is saying OBJ shouldn't have paid off part of Paris Club debt to get debt forgiveness.