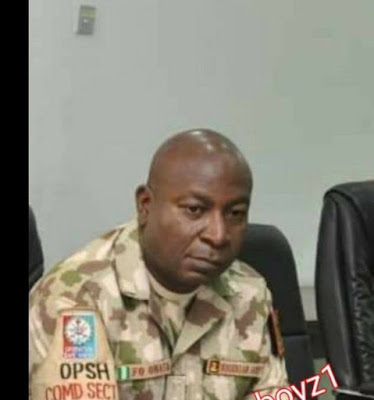 The Nigerian Army has denied any involvement in Tuesday evening’s shooting of #EndSARS protesters at the Lekki Toll Plaza area of Lagos State but Nigerians have pinned the incident on Brig. Gen. Francis Omata.

The Nigerian Army on Tuesday night said: “No soldiers were at the scene”.

But Nigerians are not swallowing that hook, line and sinker.

In social media posts, they insisted that Brig. Gen. Francis Omata was the officer who led soldiers to the Toll Gate, killing some unarmed protesters and injuring 28 people, two critically.

A popular DJ who captured the shootings on an Instagram live video mentioned Brigadier-General Francis O. Omata as the presiding officer who gave the shooting order.

Former Aviation Minister Fani-Kayode also said: “Those that butchered our kids at Lekki are not soldiers but beasts.

“They were led by one Brig. Gen. F.O. Omata. His name shall go down in infamy & shame for eternity. The blood that he shed will haunt his family & lineage from generation to generation. #BuhariMustResign #EndSAR.”

“Brig. Gen. F.O Omata is the commander in charge at the Lekki toll gate,” @LauraofLagos stated.

Francis Omata was promoted to the position of Brigadier General on the 11th of November, 2019.

He was a member of the Special Task Force Operation SAFE HAVEN;

Omata is now the Training officer of 81 Division Headquarters, Lagos.

However, Lagosians await the broadcast of Lagos State Governor Babajide Sanwo-Olu to officially confirm the perpetrators of the tragic act.

The governor announced he will speak to the people of Lagos State on Wednesday morning.

Sanwo-Olu earlier stated that the Lekki Toll Gate shooting was caused by forces beyond the control of his government.