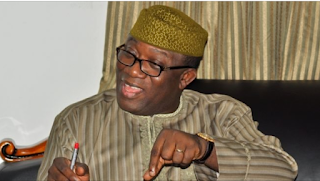 Ekiti State Governor, Kayode Fayemi, has debunked speculations that the All Progressives Congress (APC) has reneged on its promise to restructure Nigeria.

Fayemi noted that the party set up the El-Rufai Committee to make recommendations to its leadership, as a demonstration of its commitment on the issue.

He stated this in an interview with journalists in Lagos on Sunday, as part of activities to herald the celebration of the second year of his second term in office.

According to the Governor, the El-Rufai panel has since submitted its report, and “concrete steps had been made to make proposals to the National Assembly”.

Fayemi noted that “true federalism is the answer” to most of the challenges Nigeria was grappling with at the moment.

He noted that the onus was on the National Assembly, to look at the previous reports of National Conferences.

Fayemi said many recommendations on restructuring, devolution and true federalism were embedded in the reports of the Niki Tobi Panel, the 2004 Conference set up by former President Olusegun Obasanjo and the 2014 conference established by former President Goodluck Jonathan.

“We must confront our reality as a federation. The current structure is supportive of unitarist model. The state structure, for now, is problematic. There is a need to move towards devolution, not only of functions but also resources,” he added.