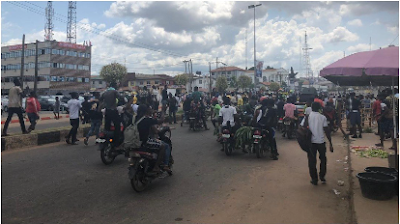 The socio-economic activities in Akure, the Ondo State capital is currently on a standstill following the blockade of major routes within the state capital.

Hundreds of youths in the state identifying with the End SARS protest mobilized themselves to major junctions in Akure as they continue to demand an end to police brutality.

Amidst the rising tension across the country, some parents in the state have appealed to the state Governor, Oluwarotimi Akeredolu to urgently shut down schools for the safety of the younger ones.

Most of the residents who had left their homes to source for their daily living were caught in the blockade as many were forced to trek long distances while others had to turn back home.

Some of the areas barricaded by the protesters within the state capital are Fiwasaye/Iyeoma junction, First Bank roundabout, Adegbola Junction as well as Ilesha Garage – Road Block axis among others.

At some of the junctions blocked by the protesters, the youths were seen dancing to various tunes as they also cooked while others played football on the roads.

Speaking on the development, a motorist who simply gave his name as Tayo lamented that being a commercial driver, the job for the day has been thwarted by the protesters.

He appealed to the protesting youths to find a way of not allowing their agitations affect the common man on the street.

One of the coordinators of the protest, Babatunde Ahmed, threatened that they would remain on the road until the government does the needful.

Meanwhile, a parent, Mrs Veronica Ajayi said the best move will be for the state government to immediately order the closure of all schools in the state.