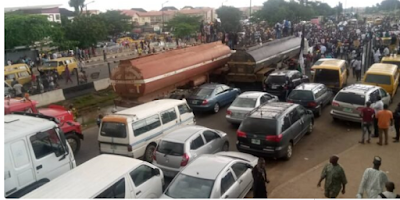 #EndSARS protesters in Lagos have shut down the Lagos-Ibadan expressway.


The protesters in their thousands are currently chanting their simple demand: “End SARS now”.

Over the past week, Nigerian youths at home and abroad have been protesting against police brutality which has been ongoing for decades.

The youths are asking that the federal government scrap the Special Anti-Robbery Squad (SARS) of the force for its indiscriminate use of force, which has led to the deaths of numerous Nigerians.

Mohammed Adamu, the inspector general of police, on Sunday evening dissolved the special police unit with a promise to redeploy the officers to other units.

Since the dissolution, there have been cases of police brutality across different parts of the nation.