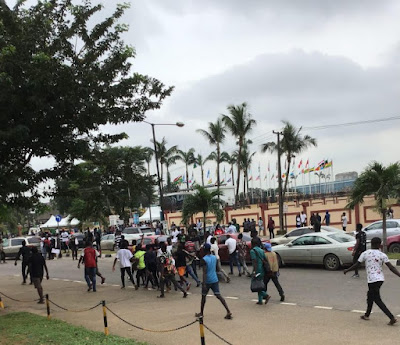 Protesters were sited carrying sticks and other dangerous weapons beating up people suspected to have infiltrated their ranks and files.

They have sent a group of hoodlums to Alausa protest. They came with knives, cutlasses and axes. New ones

About 12 thugs just tried to disrupt our protest in Alausa. They came with machetes, axes and guns.

At first we tried to reason with them then when they became too aggressive we let them have the brutal beatdown they were begging for#SWATMUSTEND pic.twitter.com/n7Bh1UQYr1

The entrance to the State House of Assembly, Alausa where the crisis erupted was thrown into chaos as angry youths descended on people suspected to have stolen some phones.

A group of youths were seen beating and hitting one of the victims with sticks as he laid down as if he was unconscious.

The victim was rescued by some officials of the Rapid Response Squad, RRS, as he was almost being beating to death.

Look at their faces. They are not protesters. They came here to steal and disrupt. We handed them over to the police. Before the police will change the narrative. pic.twitter.com/g4oPFctjWL

The chaos lasted for several minutes before it was brought under control. There was traffic gridlock in the area.

The youths are back to protesting

All thugs caught with wounds at Alausa have been treated & they going to deposit them at the Police Station.

Protest is back on pic.twitter.com/3XlkCFEAR1