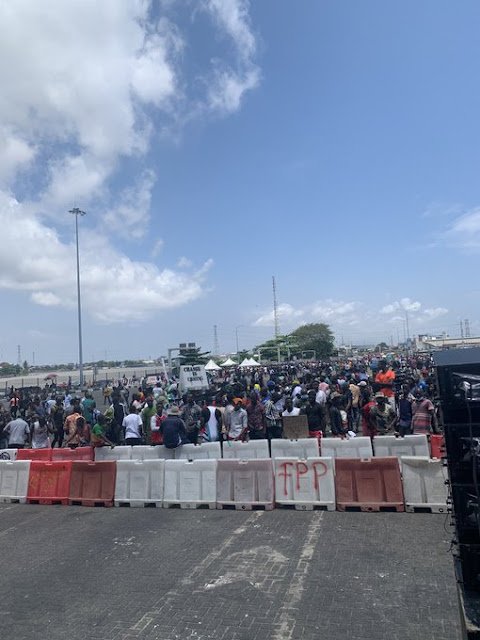 Some youths on Tuesday continued their #EndSARS protests at Alausa, Lagos State despite the curfew imposed on the state.

Apart from the curfew imposed by the Governor, Babajide Sanwo-Olu, the Lagos State Police Command also banned protests in the state.

A few hours after the curfew took effect, the youths continued to push for their demands peacefully.

Though policemen and soldiers were deployed in the venue of the protest, they did not disperse the protesters.

Some of the protesters guarded the vehicles of the policemen to prevent them from being attacked by hoodlums.

When the military personnel got to the venue of the protest, the youths formed a ‘guard of honour’ to welcome them and later rode on their vehicle as a form of solidarity.

Also, the protesters failed to vacate the Lekki toll gate.

Instead, they sat on the floor as a symbol that they were not ready to vacate the venue of the protest.

We dey kampe for Lekki toll gate. Our protests continues! Fuck the curfew! This is where we are doing our own curfew! No relenting! We are focused!! #EndSARS pic.twitter.com/dHC8ORkD89

Guys please I don’t know how to verify these men, dem just come the lekki toll gate and cut off the security cameras. Saying they are from the government, hmm 🤔 pic.twitter.com/TPJm8NDD8I

Happening now in alausa. #EndSARS Protesters welcomed soldiers in grand style and they supported us. We are smart and intelligent. #5for5 #CurfewInLagos #AlausaProtest #LekkiProtest pic.twitter.com/c6uU5Yi0M1

Earlier, the Lagos State Police Command had banned protests in the state.

This was contained in a press statement by the Lagos Police Public Relations Officer, Muyiwa Adejobi, on Tuesday.

The police ban came a few hours after the Lagos State Government imposed a 24-hour curfew on the state, starting from 4 pm.

Before the declaration of the curfew, at least two police stations were burnt in Lagos State by hoodlums.

The statement read in part, “Due to the new development of violent attacks on police officers and men and formations including innocent Nigerians in Lagos State, and the 24-hour curfew imposed by the Lagos State Government with effect from 4 pm today October 20; the Lagos State Police Command wishes to inform the public that henceforth no protest or gathering or possession, under whatever guise, is permitted within Lagos State.

“In light of the above, all security agencies have deployed adequate personnel to take charge and enforce the curfew across the state.

“The command regrets to confirm the setting ablaze of Orile Police State today at about 10am, where some of our policemen were critically injured and unconfirmed reports state that one of them is dead.”

The PPRO regretted that the #ENDSARS protests have been hijacked by hoodlums.

“It’s crystal clear that the #ENDSARS protest has been hijacked by hoodlums who want to run down the state and the police command will resist such a state of anarchy, unrest, and brouhaha with all powers within the ambit of the law.

“While the command is resolute in the sustenance of human rights and democratic tenets, the public is hereby warned to comply with the curfew and desist from any act of violence in the state as the command will resist such in totality,” he added.