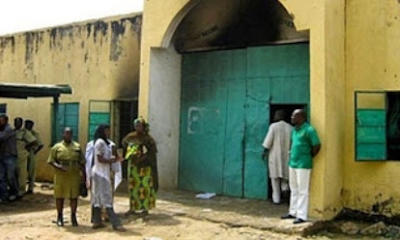 The federal government says the Ikoyi Custodial Centre in Lagos is under control.

Hoodlums attempted to break in on Thursday.

The attackers set some parts of the facility on fire.

Reacting, the Ministry of Interior assured that the situation did not get out of hand.

The government said armed prison operatives, the police and soldiers were protecting the centre.

On the arson, authorities say the Fire Service is containing the inferno.

“Armed squad of the @CorrectionsNg, @CIVILDEFENDERS, @PoliceNG and men of the Nigerian Army are providing security at the facility. @Fedfireng is dealing with the fire.