Wike: The emerging champion of the South-South region 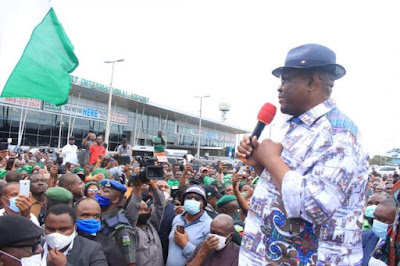 Governor Nyesom Ezenwo Wike, went to the ancient city of Benin, saw and faced the agents of a siege, conquered the godfather. But he was also quick to give credit to all those who joined him in the battle to accomplish the sweet victory and reclaim Edo State for the Peoples Democratic Party (PDP)and bring all the States in the Region under the protection of the Umbrella.

“Let me also thank the Governor of Edo State. He gave us the necessary support that has led to this victory. Also, we thank all those who worked in the campaign train in Edo State. We also appreciate the Media for the positive coverage of the election”.

Indeed, it is no longer in contention, that Governor Wike has transformed into an iconic political phenomenon, so much so that the ebullient Dino Melaye has already dubbed him “the National Governor”; a title which is sure to gain traction and national appeal in the coming weeks and months.

For many discerning political watchers and Nigerians, the Edo State Governorship election was without doubt, Governor Wike’s election. From the very onset, he midwifed the peace and reconciliation process that led to admission of Governor Obaseki into the PDP family and his eventual emergence as the party’s flag bearer in the just concluded Edo State Governorship election.

First, as a national leader who understands the dignity of the office of a duly elected Governor of every State, he chastised the Nigeria Governors Forum for failing to speak up and protect a fellow Governor, Godwin Obaseki, though belonging to the Opposition Party.

In fact, some leaders of his own party demeaned his office, embarrassed and humiliated him, as he ran from pillar to post, seeking allies and support in his battle to retain his Party’s Governorship ticket for the Edo guber polls, against a godfather who wanted him out at all cost.

Then, as a true patriot and Party man, whose overriding objective has always been to achieve and restore the PDP to its pride of place as the number one Party in the country, Governor Wike, recognized the bountiful dividends of embracing Governor Obaseki into the family.

He also became the matrix and torch bearer in the reconciliation and harmonization of all conflicting and contentious interests in the resolution of the party’s Guber ticket candidate. He brokered peace, addressed disputes and concerns satisfactorily and ensured that all interests were accommodated.

The overwhelming success of his intervention was displayed, when all the PDP Guber aspirants not only withdrew their intentions, but admirably lined up behind Governor Obaseki on the podium, as he received his flag of nomination from the Party, to contest the Governorship election, as the PDP candidate.

This singular achievement left the Opposition completely speechless, broke the first leg of their politically unstable table and eventually led to the ignoble sacking of their national chairman and erstwhile godfather of Edo politics.

Against the backdrop of this resounding political accomplishment, the appointment of Governor Wike as the PDP National Campaign Council Chairman for the Edo election, became inevitable. The magnitude of the challenge was enormous, given the extraordinary circumstances and the lingering affiliations that still defined Governor Obaseki’s membership and emergence in the PDP.

This, coupled with the fearsome prospect of ‘Federal might’ which the Opposition was poised to deploy in the election, would have cowed a lesser, lily livered man, but Governor Wike was the man for the job and embraced the challenge with open arms.

Needless to say that from the moment he was announced as the PDP National Campaign Council Chairman for the Edo State Election, a vicious campaign to discredit him, by those who knew the overwhelming influence and authority his involvement in such a critical position would have on the overall election and especially on the good people of Edo state, commenced with the aid of some gullible media outlets, who would sooner learn to their chagrin, that the Rivers State Governor was not a man to trifle with.

Governor Wike also systematically embarked on a robust, well structured media charm offensive himself, highlighted by a series of selected prime time television interviews, where he quite adeptly deployed the platform to succinctly and unequivocally set the tone and mindset that would eventually shape and determine the outcome of the Edo Guber elections.

As the chairman of the PDP National Campaign Council, his appearances at the Party’s state-wide rallies were usually electrifying as he galvanized the teeming crowd with his unique, charismatic, dynamic and dexterous style.

His message resonated powerfully with the people’s expectations and desires. His admonitions telling them what to do on election day were on point. He presented himself as an example and as a leader who will lead from the front. His presence inspired hope, enthusiasm, optimism, courage and conviction in the belief that the will of the people would always triumph over every obstacle and intimidation.

Governor Wike arrived Benin, just like the other leaders of the Opposition Campaign Council, but with his own touchdown the whole atmosphere became abuzz with excitement and a collective sense of identity, existential purpose and historical essence for the Edo people.

Members of the opposition, including those who had earlier arrived Edo for the same assignment as he, were even heard complaining loudly and bitterly that they don’t know what he is doing in the state. They were in panic.

A siege with over 300 armed policemen, complemented with armoured tank and other arsenal was hurriedly placed on his hotel accommodation premises to prevent him from stepping out and when the Inspector General of Police called and told him to leave Edo State that his presence was likely to cause unrest amongst the people, Governor Wike’s response was classic, typical and well reported.

He then followed up his nonplussed stance with the Police IG by holding a World Press Conference at the Hi-Tech PDP Situation Room where he alerted the nation and the International Community of what was going on.

He completely wrong footed the Opposition, as usual and he was always one step ahead. But the most impressive aspect of the strategy was that he appeared with both Governor Ifeanyi Okowa of Delta State and Chairman of the South South Governor’s Forum, Governor Seyi Makinde of Oyo State who is also chairing the Southwest PDP Campaign Council, as well as other Party leaders.

It was not a one man show but a collective effort of the Party, embodied by a man and leader, who has grown to become the unifier and champion of the South South Region’s political identity.

By virtue of the progressive thinking and pragmatic sacrifices of Governor Wike, the South South Region Governors can now speak loudly and without fear or intimidation, with one united voice.

The objective of bringing all the South South States under one political leadership umbrella has been achieved with this overwhelming success in Edo State.

Over the years, Governor Wike has proved his enduring mettle, as a political tactician beyond doubt. In the PDP, as well as on the political landscape, he has emerged as the referential face of the Party Brand, not only by virtue of his widely reported sterling developmental achievements and legacy infrastructural and other projects, but also for his robust advocacy, articulation, constructive critical observations and uncensored maturity and honesty.

He enjoys a very cordial relationship with his brother governors which has attracted tremendous goodwill to him especially in the national political space, where he has achieved an impressive pedigree and comprehensive acceptance across board.

There is a saying that all politics is local and Governor Wike is a leading disciple of the localization of politics, which not only celebrates the adage that charity begins at home but also promotes the agenda of Rivers first, which goes a long way to explain why he is passionate about the protection of Rivers lives, property and indeed everything Rivers.

No wonder he was welcomed back home in Rivers State, after his exertions in Edo state, by a large, jubilant crowd of Rivers sons and daughters, who had kept vigil and prayed for him, when news filtered in that the police had laid a siege on his hotel.

Rivers people and indeed many who followed the Edo state Governorship elections, heaved a huge sigh of relief to see their darling Governor Wike back home, hale and hearty, to continue his good works in the state.

At a time, when Nigeria is in dire need of patriotic and responsible Citizens and leaders, as our political life evolves, Governor Wike stands tall as one who epitomises the true characteristics of what it takes to be a great leader for his people.

-Nsirim is the Commissioner for Information and Communications, Rivers State