Desmond Elliot, Okunbor, ‘Kabaka’… those who contributed to Ize-Iyamu’s loss 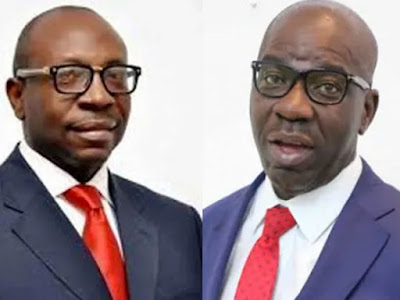 It was a keenly contested race, considering the two major contenders who had been on opposing sides in 2016. This time, however, the stakes were seemingly higher. Godwin Obaseki, governor of Edo, who had enjoyed the support of Adams Oshiomhole, his predecessor, had been disqualified from contesting on the platform of the All Progressives Congress (APC). He defected to the Peoples Democratic Party (PDP), while his major opponent, Osagie Ize-Iyamu, who had flown the flag of PDP in 2016, became the APC governorship candidate. With the actors in play, anything was possible in the build-up to the September 19 election.

Although 14 political parties participated in the election, it was clear that it was a contest between the PDP and APC. Four years ago, APC had coasted to victory by a margin of more than 60,000 votes, and in 2020, it was clear to those who understood the stakes that Obaseki had a battle of sorts to win if he was to retain his seat as the number one man in the state. Interestingly, from Oshiomhole’s dramatic campaign, to the Edo versus Lagos godfather theatrics, and the “operation show your result”, going by the music in the air in the days before the election, among other factors, six individuals whose influence may have had significant impact in deciding the winner of the poll, served Obaseki well to grant Ize-Iyamu a loss that may have probably been avoidable.

In another life, Oshiomhole may have been a successful marketer. His unique way with words is one for the history books. However, his “gift” contributed in no small feat to Ize-Iyamu’s loss considering what had played out in 2016. If anyone could be said to have made the most significant level of difference in how the election would eventually go, that person would be Oshiomhole, suspended chairman of the APC. He, however, turned out to be Ize-Iyamu’s albatross.

In the buildup to the 2016 governorship election in Edo, Oshiomhole didn’t mince words in expressing his disgust with Ize-Iyamu, at the expense of promoting Obaseki at the time.

“Do you know why he wants to be a governor – Ize-Iyamu wants to be a governor to get immunity to protect him from prosecution. Do you want to hand over Edo treasury to a thief? I’m a proud Kukuruku man, not the son of a cook, but we don’t take money for police, money meant for soldiers, money meant for defence to secure Christians in churches. Pastors are collecting it and sharing it to their party members,” Oshiomhole had said about Ize-Iyamu in July 2016.

As it is always said, in politics, there is no permanent friend or enemy. But the weight of the campaign of calumny traded by Oshiomhole against his now favourite (Ize-Iyamu) may not have been easily forgotten by most Edo voters as his sudden U-turn could not erase the scar he painted on the minds of the people. Therefore, Ize-Iyamu may have been fighting a lost battle.

Bola Tinubu, national leader of the APC and former governor of Lagos state, may have thought he was sending a strong message to Edo people to shun the reelection of Obaseki, when he made a short video a few days to the election, saying Obaseki “does not deserve any democratic ballot paper”.

However, contrary to the expected outcome by APC, the video was trailed by large-scale criticism on and off social media, with many wondering why the APC leader seemed vested in the election outcome in Edo. And so did the #EdoNoBeLagos mantra gain more ground. The video may have been targeted at discrediting Obaseki, but it appeared to have only strengthened the resolve of Edo people on voting their choice candidate.

Politics of godfatherism has featured prominently in the Nigerian political space. However, it appears Desmond Elliot, Nollywood actor and lawmaker representing Surulere at the Lagos state house of assembly, went too far in his attempt to sell an idea that there was nothing wrong in godfatherism.

In his excitement to campaign for Ize-Iyamu, while trying to discredit the #EdoNoBeLagos slogan, he had said there was nothing wrong in godfatherism. And he didn’t stop there. He drank water from a bottle, got more comfortable in the red jacket he was wearing while being interviewed and pointed his hand to his chest, saying “I’m a product of godfatherism.” The statement served to only make the APC campaign even more questionable, as it seemed the party was indeed promoting the concept of godfatherism.

Nigerian politics is one that favours popularity. The popularity of Gani Audu, the APC deputy governorship candidate, may have added little impact to his principal’s election compared to Philip Shaibu, Obaseki’s second-in-command. Although Audu and Shaibu are both from Etsako west local government area, and had both served in various capacities as government officials, serving as a deputy governor for four years was significant enough for Shaibu to sell key achievements of the administration to the people of Edo.

Besides, Shaibu learnt well from Oshiomhole, with whom he was once very close. After all, there are only a few people in Nigeria who can pull off the NLC “khaki” aside from Oshiomhole and Shaibu. On the flip side, for Gani Audu, he seemed to just be a convenient way to balance the Christian-Muslim ticket for APC, as Desmond Elliot repeatedly pointed out when he kept saying “you have a pastor and an imam” as his way to campaign to the Edo people.

Hosa Okunbor, business mogul and philanthropist, is one of the many influential figures in Edo politics, and when he openly threw his weight behind Ize-Iyamu, it looked like Obaseki had another major threat to contend with.

Okunbor, in an interview, had boasted: “I would support Ize-Iyamu with my hard-earned money and people that know me know that when I believe in something, I can spend my last kobo to achieve it.”

“He (Ize-Iyamu) is lucky to have someone like me. When God wants to work, he will bring all together to work for your good.”

Okunbor, a former supporter of Obaseki, later fell out with the governor, accusing him of mismanaging the economy. But, as the results eventually proved, Okunbor’s money did little to secure victory for Ize-Iyamu.

TONY KABAKA — AND THE ‘LIONS AND TIGERS’

Tony Adun, better known as Tony Kabaka, former revenue collector for the state and strong supporter of Oshiomhole, didn’t give up on his derogatory campaign against Obaseki.

The feud was intensified after his multi-million naira hotel, T. Latifah Hotel and Suites, was demolished by the state government and an N18 million suit was slammed against him for logistics cost in bringing down the property.

Kabaka, who accused Obaseki of “forgetting himself”, may have believed that without his support and that of his principal (Oshiomhole), Obaseki would not have much in terms of influence that could swing the votes in his favour.

He pitched tent with Ize-Iyamu, his “awaiting excellency”, and was seen in a video introducing himself and the “lions and tigers from different local governments” who would work for the APC candidate in the election. In the same “lions and tigers video”, Ize-Iyamu had addressed the gathering, saying “your influence goes beyond one polling unit. You will do your units; you will move to other units….this election will be ‘operation show your result’, and that operation, I tell you, na many of una e go favour’.”

Ize-Iyamu’s posture in that video seemed to encourage flouting the code of conduct for peaceful elections, as he was encouraging his supporters to ignore the rules on restriction of movement. However, it appears the Edo people proved Kabaka and his cohorts otherwise, to show that even in the jungle, there is need for some sense of order in the interest of preserving the peace.