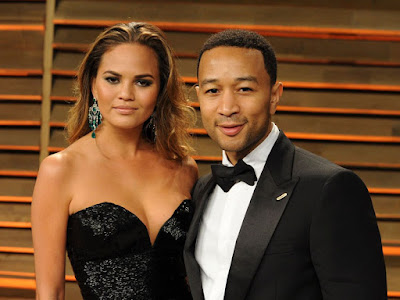 Chrissy Teigen, wife of American Singer, John Legend has been hospitalized after suffering heavy bleeding during her pregnancy.

According to her, she made the post to update fans from her hospital bed and let them know she’s getting better.

She said “We all know I’ve been on bed rest for a few weeks and that’s like super serious bed rest.

“I get up to quickly pee and that’s it, I take baths twice a week, no showering, just as little as possible.

“But I was always, always bleeding and I’m about halfway through pregnancy and the blood has been going on for about a month, maybe a little bit less than a month.

We’re talking like more than your period girls, it’s definitely not spotting.

“A lot of people spot but it’s usually fine. Mine was a lot.”

She went on to explain that she was admitted to the hospital after the bleeding worsened comparing it to “Like if you were to turn a faucet onto low and leave it there.

“It was at the point today where it was never stopping, the bleeding.’

“In the simplest of terms we can say my placenta is really, really weak.’

“it’s so weird because I feel really good. I’m usually at my happiest, pregnant, mood-wise. That’s why it’s so hard for me to come to terms with.’

“So I feel really good and the baby is so healthy, growing stronger than Luna or Miles.

“He moves so much, so much earlier than they ever did and I’m so excited for him, he’s the strongest little dude.

“He’s the strongest coolest dude in the sh—iest house.”

“He didn’t have the strongest chance at the very, very beginning so all we’re doing now is trying to make sure he has a lot of fluid around him and I’m resting obviously as much as possible.”

”If you are a doctor I cannot express enough how badly I would like you to stop your guessing games or even diagnosing me via twitter.

“I have very good doctors who know the entire story. I share a lot but not absolutely everything,” she added.