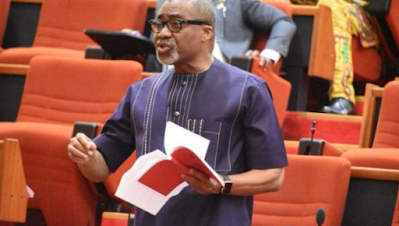 Some senators have rejected the nomination of Aisha Umar as the director-general (DG) of the National Pension Commission (PENCOM).

There was a row at the upper legislative chamber on Tuesday when Senate President Ahmad Lawan read a letter by President Muhammadu Buhari seeking the confirmation of Umar, who is from the north-east, as the PENCOM DG.

The president also appointed Oyindasola Oni as chairman of the commission.

Enyinnaya Abaribe, senate minority leader, said the nomination was in breach of the law setting up the commission and of the federal character principle.

Abaribe said section 20(1), section 21(1) and (2) of PENCOM Act stipulate that a DG must be appointed from the same zone as the past DG to complete an outstanding tenure.

“In the event of a vacancy, the president shall appoint a replacement from the geo-political zone of the immediate past member that vacated office to complete the remaining tenure,” the minority leader quoted the PENCOM law as saying.

“I recall that the tenure of the incumbent was truncated, therefore the new letter from the president that has now moved the Chairman of the commission to another zone may not be correct because it is against the law setting up the PENCOM.

“Before you (Lawan) send it to the appropriate committee, I wish to draw the attention of the committee to it.”

But responding, Lawan said any petition against the nomination of Umar should be sent to the committee in charge of screening the nominee.

“If there is any petition to that effect it should be sent to the committee,” the senate president said.