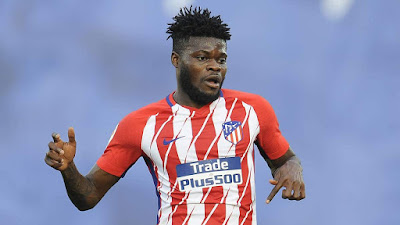 Arsenal has suffered a major transfer ‘blow’ in a bid to sign midfielder, Thomas Partey, from Atletico Madrid this summer.

The Gunners offered both Alexandre Lacazette and Matteo Guendouzi to Atletico Madrid in an attempt to strike a deal for Partey but the La Liga giants were not interested.

The FA Cup champions have been pursuing the Ghanaian international over the summer but have failed to make a breakthrough in discussions for his signature.

Partey has a £45 million release clause in his current contract with Diego Simeone’s side, and Atletico is insistent that Arsenal must pay that price if they want to sign the player.

Arsenal has seen their finances reduced due to the financial impact of COVID-19 and especially after the arrival of Gabriel Magalhaes for £27million from Lille.

Mikel Arteta’s side are unlikely to meet the £45m for Partey, so they have been trying to negotiate a deal that involves swapping players.

Lacazette and Guendouzi were both offered in exchange for Partey, but Atletico did not take the bait, according to a respected Italian journalist, Fabrizio Romano.

“For sure they [Arsenal] spoke with Atletico Madrid,” Romano said on Lee Gunner’s YouTube channel.

“It was during the meeting they had for Thomas, the first time it was in July.

“They spoke about Matteo Guendouzi, and they also spoke about Lacazette, but at the moment, Atletico Madrid was not going for Lacazette.”

Arsenal is now expected to either pay £45m to sign Partey or allow Atletico players to manage a swap deal.

The 27-year-old is also attracting interest from Paris Saint-Germain and Inter Milan.