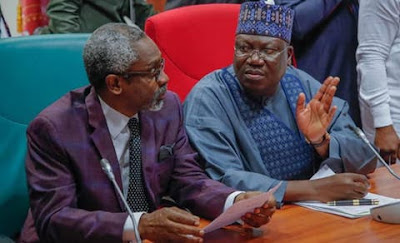 SERAP’s Deputy Director, Kolawole Oludare, said in a statement on Sunday that the suit, filed at the Federal High Court in Abuja, followed the failure of the Senate President, Ahmad Lawan; and Speaker of the House of Representatives, Femi Gbajabiamila, to honour its July Freedom of Information request.

“Reports of several public hearings and corruption probes have remained secret, and the allegations unresolved,” he said.

SERAP is, in the suit, praying the court to issue “an order of mandamus to direct and compel Dr Lawal and Mr Gbajabiamila to send all reports of completed public hearings and corruption probes to appropriate anti-corruption agencies to consider if there is sufficient admissible evidence to pursue prosecution.”

SERAP is also seeking “an order for leave to apply for judicial review and an order of mandamus to direct and/or compel Dr Lawal and Mr Gbajabiamila to widely publish all reports of completed public hearings and corruption probes by the Senate and the House of Representatives, and to disclose the number and names of any indicted suspects since 1999.”

SERAP said it would like to know the number of corruption probes so far undertaken by the National Assembly; the number of such probes that have resulted in an indictment and the names of individuals or corporate bodies so indicted.

SERAP said it believes that the National Assembly ought to have, over the years, been forwarding to anti-graft agencies the reports of its corruption probes that have resulted in an indictment.

The group said it was demanding the results of the corruption probes to test whether or not the multitude of corruption probes so far conducted by the National Assembly were not politically-motivated and initiated to serve personal interest.

It said, “SERAP is concerned about the systemic and widespread corruption allegations in MDAs and among high-ranking public officials, and the negative impacts on socio-economic development, as well as access of Nigerians to public goods and services, including quality education, adequate healthcare, clean water, and regular electricity supply.