One dead, four injured as building collapses in Delta 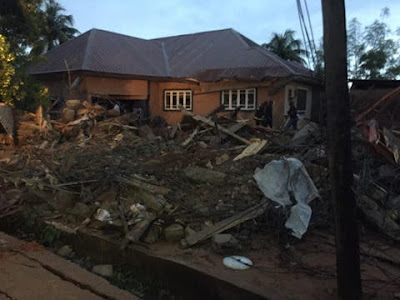 One person died while four others were injured when a building collapsed in Asaba, Delta State.

The building collapsed after a thunderstorm on Saturday.

It was gathered that the building located behind Police Officer Mess, in Okwe, Oshimili South area of the state collapsed around 5pm.

The building was under construction when its collapsed.

Workers were at the site when the incident happened.

The Delta State Emergency Management Agency, Mr Daneid Okpor, at the scene of the incident, said the building collapsed as a result of structural defect.

He said, “We observed that there was a thunderstorm and that made the building to quickly collapse. The thunderstorm could be a part of it but the structural work is very poor.

“About five people were trapped, we have been able to rescue all of them, they are now receiving treatment at the hospital. Only one confirmed dead.”

The Council Chairman, Mr Uche Osedebe, aaded,”My observation here is that there is a structural defect and that led to the collapse of this building. People should always seek for professional and get building approval.

“Now, we have lost a live and those who are at the hospital, we don’t know whether they are going to survive.”