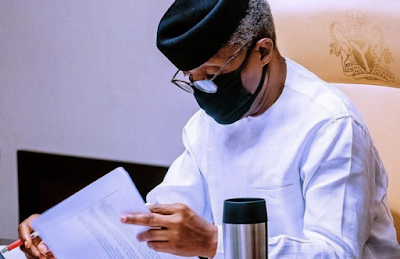 Vice President Yemi Osinbajo has lamented that the poverty situation in the country, as well the economic distortions and hardship caused by the COVID-19 pandemic are deepening daily.

He said it was therefore important for relevant ministers and other key actors to expedite action on the N2.3trn stimulus package designed by the government to mitigate the effect of the crisis on the economy.

According to a statement on Tuesday by his spokesman, Laolu Akande, the Vice President made his position known in his presentation on the Economic Sustainability Plan at the First Year Ministerial Performance Review Retreat at the Presidential Villa, Abuja on Monday.

The statement was titled, ‘VP to ministers at retreat: The N2.3trn stimulus package must be implemented quickly’.

The statement quoted Osinbajo as saying, “We are already in Day 67 since the plan. Nothing is going to happen by magic, we have to simply do this stuff.

“We have to ensure that we have the money and ensure that day by day, we are measuring our achievements and trying to ensure that we do the things that we need to do. And we simply are not favoured by time, every single day, the poverty situation and the economic distortions deepen.”

Osinbajo was further quoted as saying that the only way out of the current problem was to fund production, enable consumer spending so that people can go and buy things, and we to put money in people’s hands.

He said under the mass agriculture programme, the government had enumerated four million farmers.

Under the mass housing programme, he explained that the government would build 300,000 homes across the country and would ensure that their prices did not exceed N2m.

Osinbajo said all the components of the plan were designed to create jobs.