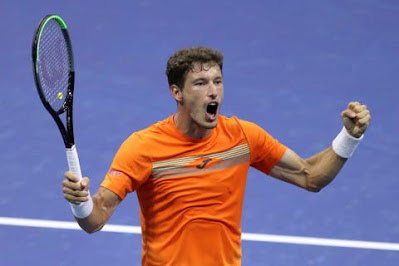 Carreno Busta of Spain defeated Canada’s Denis Shapovalov in a roller-coaster of a five-setter to reach the US Open semi-finals early Wednesday.

The Spaniard will play fifth seed Alexander Zverev of Germany, who progressed to the semis earlier Tuesday, for a place in Sunday’s final.

“I’m destroyed, but I’m very, very happy after this fight, this battle,” said Carreno Busta, who was a US Open semi-finalist in 2017.

He said it was “incredible” to be back in the last-four again after working “very, very hard” with his coach during the quarantine shutdown.

Carreno Busta admitted though that fortune was on his side at times in the match.

Shapovalov was undone by ill-timed double faults and misplaced shots during key moments of the match.

His service game was particularly wayward during the two tie-break sets he lost.

Shapovalov hit 11 double faults while Carreno Busta had only one.

The Canadian smashed 76 winners compared to just 33 by the Spaniard.

But Shapovalov was also his own worst enemy, recording a whopping 77 unforced errors to the 42 hit by Carreno Busta.

The tie-break sets that Carreno Busta won were a test of endurance, lasting 77 and 68 minutes.

When Shapovalov sprinted to a 6-0 win in the fourth set in just 28 minutes, the writing seemed to be on the wall for the Spanish player.

But after a medical timeout, he surged to a 5-2 lead in the deciding set before a couple of errant forehands by Shapovalov in the final game handed Carreno Busta victory.

He had progressed to the quarter-final match by default after Novak Djokovic was disqualified during their last-16 match for accidentally hitting a line judge in the throat with a ball.

The disqualification of Djokovic blew the men’s competition at Flushing Meadows wide open.

His departure means the US Open will crown a first-time Grand Slam winner on Sunday.