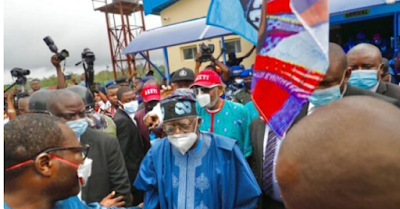 Bola Tinubu, a national leader of the All Progressive Congress (APC), says the Peoples Democratic Party (PDP) in Ondo state is dead.

Speaking during the flag-off rally of the re-election campaign of Rotimi Akeredolu, governor of Ondo, Tinubu said the PDP stands no chance in the October 10 election.

Although there are 17 candidates in the election, political pundits have said the race is between Akeredolu and  Eyitayo Jegede, candidate of the PDP.

But addressing APC supporters at Akure Township Stadium on Saturday, Tinubu said: “You don’t fight the PDP. There is no point fight a corpse inside the coffin, just settle down and calmly nail their coffin.”

He asked the party members to rally round Akeredolu and give him all the support he needs to lead the state.

“Unity and adherence to collective purpose are hallmarks of progressive politics. Our ability to place the public welfare above our personal ambitions is what differentiates us from the political regressives who would rather that the general welfare suffer so they can fulfil their personal whims and wishes.”

“As progressives, we must carefully tend to our bridge of unity. We must never allow it to break. We entered politics and governance to serve the people and this purpose should always bind us in ceaseless fraternity and togetherness.”

Earlier, he met with traditional rulers at Dome International Event Centre, Akure, and appealed to them to work for the APC governorship candidate in the election.

He charged the traditional rulers to speak with their chiefs and subjects to ensure that Akeredolu is re-elected.

“Our monarchs, your support is needed, though you have assured us that you have agreed to ensure Akeredolu comes back for second term,” he said.

According to the APC leader, people have seen the good things such as roads, agricultural developments, schools, industrial park and others things done by the Akeredolu administration.

“We have commissioned the Revenue House today and he has assured us of bringing back the produce marketing board. He has also guaranteed employment for youths across the state,” he said.

“Kabiyesis, our schools that you have built and sent us to has brought us where we are today. If we don’t invest in education like Akeredolu has done, our children will lag behind.

“Youths need jobs, our youths who are left at home need to be catered for because we cannot leave them. We want a second term.

“Please, we are here to tell and show that there is no quarrel between children of Oodua. We will not go back to the situation of 1983.”