One killed as gunmen invade relaxation spot in Kogi 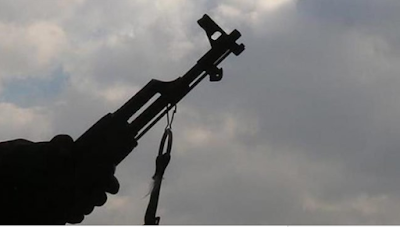 Three gunmen were said to have stormed the Royal Garden relaxation spot located at Egume, Dekina local government area of Kogi state, and killed one person.

Many others were also injured in the attack.

William Aya, the command spokesman in Kogi, in a statement on Saturday, confirmed the incident, adding that the armed men invaded the relaxation spot at about 7.45pm on Friday.

He explained that officers were drafted to the scene of the incident, but did not clarify if the victims were robbed.

The hoodlums were said to have fled before the arrival of the police.

“We met one yet-to-be identified body lying in a pool of his blood and moved him to a nearby hospital where he was confirmed dead. The body was deposited at the hospital for autopsy,” the spokesman said.

Ayuba Ekpeji, the Kogi commissioner of police, was quoted in the statement as saying that a team of operatives have been deployed to hunt for the gunmen.

He also gave the assurance that the police would find the killers and they would be prosecuted.

The commissioner urged members of the public to always be vigilant and report any suspicious activity around their neighborhoods to security agencies.