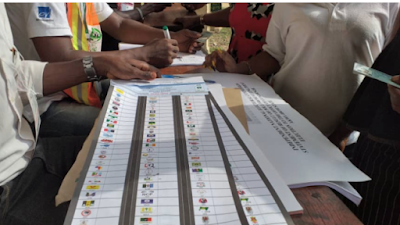 Tajudeen Yusuf, a member of the house of representatives from Kogi state, says the European Union (EU) and UK should take their cue from the US and impose visa restrictions on riggers of elections in Nigeria.

On Monday, the US imposed visa restrictions on some individuals for their actions during the Kogi and Bayelsa governorship elections.

The identities of those affected by the ban are not yet known.

In a statement on Thursday, Yusuf who represents Kabba-Bunu/Ijumu federal constituency in the lower legislative chamber, said there must not be a repeat of what happened at the Osun governorship poll “where they casually engineered an inconclusive election to manipulate and win through the back door”.

The legislator said in five years, the country has witnessed 22 inconclusive elections under the All Progressives Congress (APC) as against the 16-year period of the Peoples Democratic Party (PDP) when the country only witnessed one inconclusive poll.

“PDP members are joining Edo state people and all true democrats across Nigeria to call upon the United States, the EU, UK and all other countries to insist that there must be no repeat of the APC’s trick in Osun state where they casually engineered an ‘inconclusive election’ to manipulate and win through the back door,” he said.

“We shall continue to commend the USA for wielding the big stick against those who played inglorious, despicable roles in the violent rape of democracy during Kogi state’s last governorship elections; replication of such visa ban by the EU, UK and other developed countries will tame APC leaders’ penchant for foreign trips and further reassure Nigerian democrats.

“It is curious and alarming to hear that this government consistently rewards those who unashamedly subvert the people’s will during the electioneering process; for instance, a top INEC official who perpetrated ungodly roles in the 2019 Kano state elections was rewarded with more sensitive responsibilities, posted to Kogi state where further compromise was glaring and now, this same person has been posted to Edo state for next Saturday’s governorship election!

“It is historically regrettable for the nation that those who came to power professing positive change and progressive democracy have instead brought unprecedented nepotism, worsened insecurity, economic misery, high unemployment and grand schemes to thwart democracy through various means, including ‘inconclusive election’.

“All through the PDP years from May 1999 to May 2015, only one inconclusive election was recorded but sadly just between May 2015 and now, the APC leadership has given Nigeria twenty-two inconclusive elections, with clear suspicions of its inclination towards having more of such anti-democratic accomplishments.”