I am back home, Uduaghan proclaims after returning from APC to PDP 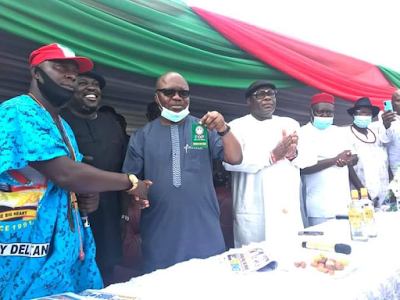 The immediate past Governor of Delta State, Dr Emmanuel Uduaghan has formally addressed his return from the All Progressives Congress (APC) back to the People’s Democratic Party (PDP).

Uduaghan’s return from the APC to the PDP have been nothing but speculative, but the former Governor confirmed the development on Monday.

“I am back home. I am back to join forces with other party greats to strengthen our party, the largest Party in Africa -PDP! Haven tasted the other side, it feels refreshing to be back home! Thank you all for receiving me back. It feels like I never left. God bless you,” the former Governor proclaimed on Monday.

Recall that Uduaghan, the immediate past Governor of Delta under the platform of the PDP between 2007 and 2015, in 2018 defected from the PDP to the APC to nurse his Senate ambition for the 2019 general elections, which he eventually lost.

Attending an APC caucus meeting held at the Presidential Villa in Abuja, the former Governor had said his defection from the PDP to the APC was informed by his desire to promote peace and development in the Niger Delta.

Upon leaving the APC, Uduaghan rejoined the PDP at his Unit 1, Ward 6, Abigborodo in Warri North local government area of the State, arriving at the venue of the ceremony with thousands of supporters at about 11:40 am.