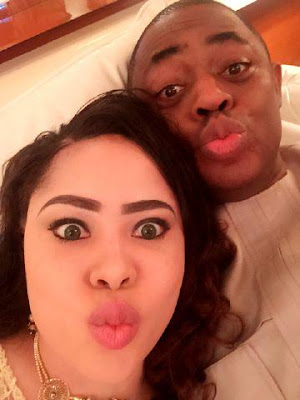 Precious Chikwendu, estranged wife of former Aviation Minister, Femi Fani-Kayode has broken her silence since the news of the crash of her marriage hits the public.

Chikwendu allegedly called it quit with Fani-Kayode over alleged domestic violence. The crash of the marriage has set tongues wagging on social media.

Chikwendu took to her Instagram page on Thursday evening to express how glad she was by quoting from Psalm 126:1-3 to console herself.


Though she did not openly speak on the bitter divorce, the Bible passages she quoted painted a picture of someone who had just been delivered from captivity.

She wrote: “When the Lord turned again the captivity of Zion, we were like them that dream.

“Then was our mouth filled with laughter, and our tongue with singing: then said they among the heathen, The Lord hath done great things for them.

“The Lord hath done great things for us; whereof we are glad.”

The marriage broke down about four months ago over alleged domestic violence, which the former beauty queen could not condone any further.

Precious had since moved out of the marital home, with the ex-minister barring her from coming to the house or seeing the four boys, including the triplets, they had together.

Fani-Kayode has not denied the separation story, except to threaten blogger Stella Dimoko Korkus, who broke the story, with libel.

Fani-Kayode and Precious Chikwendu, got married in 2015.

It was his fourth marriage, with three others before having collapsed for certain reasons.

Fani-Kayode’s first wife was Saratu Attah, daughter of former Kwara governor, Adamu Attah. They got married when he was 22. The marriage lasted between 1987 and 1990. They had a daughter together.

Next was his marriage in 1991 to Yemisi Olasunbo Adeniji.

She is now known as Yemisi Wada after remarrying. She and FFK married immediately she finished at the Law School.

The marriage collapsed after three years, with Yemisi already pregnant with the couple’s third child.