Chelsea vs Liverpool: Thiago Alcantara to be unveiled ahead of EPL clash 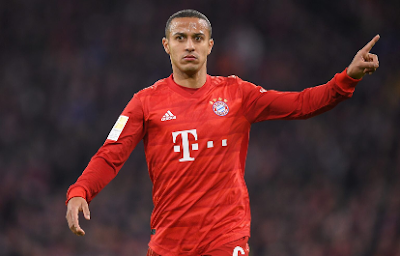 Thiago Alcantara will be unveiled as a Liverpool player on Friday, before this weekend’s trip to face Chelsea in the Premier League, the UK Mirror reports.

The Spain midfielder said goodbye to his team-mates at the Bundesliga club’s training ground on Thursday morning.

Despite Bayern’s confirmation, with Bayern chairman Karl-Heinz Rummenigge explaining that Thiago had “a great wish to do something new before the end of his career”, Liverpool refused to confirm his arrival in England.

But it is understood Thiago was due to arrive on Merseyside late on Thursday evening.

The 29-year-old will complete the second part of a medical assessment and finalise contract terms on a four-year deal.

The Reds will pay £20m, with a further £5m depending on bonuses related to success in the Champions League and Premier League, but only if Thiago plays a significant role.