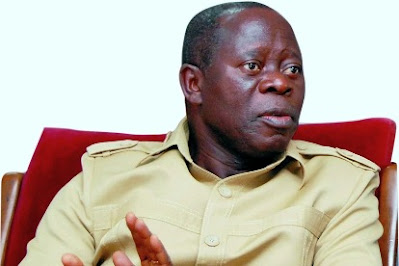 Immediate past National Chairman of the All Progressives Congress, APC, Adams Oshiomhole, has reacted to the Governor Godwin Obaseki’s victory at the just-concluded governorship election.

Recall that Governor Obaseki was re-elected on Sunday after polling 307,955 to defeat his closest rival, Pastor Osagie Ize-Iyamu of the All Progressives Congress (APC) who garnered 223,619 votes.

Governor Obaseki of the Peoples Democratic Party, PDP, won in 15 Local Government Areas of the State while Ize-Iyamu, who was backed by Oshiomhole won 3 LGAS.

Reacting, Oshiomhole in a viral video released on Wednesday, expressed gratitude to the people of Edo State.

Oshiomhole, who stated that in life you win some and lose some, added that contrary to claims that he is unhappy about the outcome of the election, he remains strong and healthy.

In the one minute video, the APC chieftain said “In life, you work hard and leave God for the outcome. You do your best and trust God to bless your efforts. I feel good, I feel strong, thank God. In life, you win some and you lose some but life goes on”, he philosophised.

He further stated that he was moved to tears and inspired by the determination of the aged and nursing mothers who endured the harsh weather to cast their ballots.

“If septuagenarians were not frustrated because card their card readers are not working, it inspired me that if at their age they don’t give up, why should I give up.”

“And I ask our people to have faith in our country because we are not going to have another one. This is our country and we must make it great. We must strengthen democracy, we must improve on it.