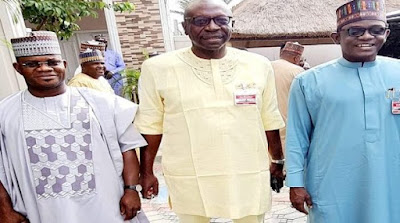 Pastor Osagie Ize-Iyamu, defeated governorship candidate of the All Progressives Congress, APC, in Edo State was in Abuja on Wednesday where he held ‘closed door’ meeting with leadership of the party.

Ize-Iyamu met with Governor Mai Mala Buni of Yobe State, who also is the Chairman of the Caretaker Committee of the APC.

At the meeting also was the governor of Kogi State, Yahaya Bello. The meeting was the first outing for Ize-Iyamu since he was defeated at last Saturday’s governorship election by Governor Godwin Obaseki, who got a second term.

The National APC had congratulated Obaseki over the victory while the Edo State APC refused to congratulate the governor-elect, rejecting the outcome of the poll.

It is believed that Ize-Iyamu might have been persuaded at the meeting to concede defeat to Obaseki and allowed peace to reign.

Ize-Iyamu had said after losing the election that his supporters endured many evils, including being prevented from voting.

He had assured them that he was studying the results along with other party members and that he would announce his next move soon.

‘I thank and appreciate my supporters, who had to endure many evils including being prevented from voting, for their support and determination during the election.

“I assure you all that I am studying the results along with other party members and will announce my next move soon,” he said.