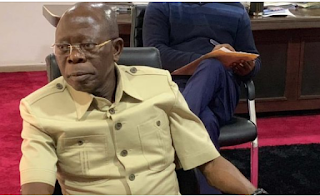 The Aslem Ojezua-led faction of the Edo All Progressives Congress, APC, has dispelled rumour that plans are underway to expel Adams Oshiomhole, a former National Chairman of the party from the party.

Ojezua told The Nation that the rumour making the rounds that the APC faction has written the national body of the party informing it of their plans to expel to end Oshiomhole’s membership of the ruling party.

Ojezua insisted that the APC was yet to meet to review the entire election, adding that such plans are not known to him.

A tweet, allegedly by Ajezua on Tuesday had read, “I have written to the APC National headquarters that I and all the party chairmen down to the ward level have all signed the petition to completely expel Adams Oshiomhole from our great Party.”

Prior to the election, Obaseki left the ruling APC for the PDP following a faceoff with his predecessor, Oshiomhole which led to his disqualification by the party due to alleged certificate issues.