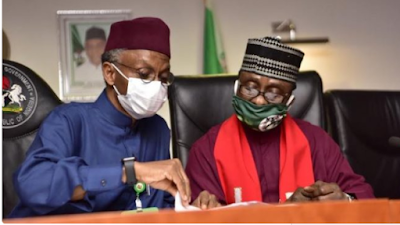 Nasir el-Rufai, governor of Kaduna state, says his administration is committed to ending the legacy of violence that has troubled the state for 40 years.

Speaking during a meeting with the national leadership of the Christian Association of Nigeria (CAN) on Monday, el-Rufai said some people are making “baseless claims” that the government is doing nothing to resolve the killings in the southern part of the state.

The governor said even with the series of interventions, the ultimate guarantee of peace is the willingness of communities to resolve their differences through lawful means.

“While we mourn the dead, our immediate focus remains to stop the cycle of attacks and reprisals. We remain committed to ending the legacy of violence that has blighted the state for 40 years, needlessly taken many lives and curtailed the life chances of others,” el-Rufai said.

“The briefings represent our answer to the terrible avalanche of skewed narratives of the current crisis, ranging from outright lies about the nature of the conflict to baseless claims that the Kaduna state Government is doing nothing to contain and resolve it.

“Part of the false narrative of the history of violent conflict in southern Kaduna is the loose use of terms like land-grabbing and genocide. They are being used in this current cycle of conflict, just as they were in the 2016/17 and the 2011/2015 cycles.

“We have requested and encouraged anybody to present evidence of any inch of land within Kaduna state that has been forcibly or illegally occupied. Were such a clear, physical and actual transgression to occur, it will constitute not only an injustice against the community displaced, but a challenge to the authority of the state within its territory that cannot be allowed to stand.

“We challenge anyone to characterise or differentiate the communal clashes, attacks and killings in parts of Northern and Central Kaduna State, as well as in Zamfara, Katsina, Sokoto and Niger States from those in Southern Kaduna. Is it because in all the other cases, the victims are lesser humans or lacking in voice and media hype? What happened to our common humanity?

“We have been consistent in saying that beyond boots on the ground, military bases and police stations, the ultimate guarantee of peace is the willingness of communities to live in harmony and their resolve to settle differences through lawful means. Some people do not want to hear this because it imposes responsibilities on individuals and community leaders to keep the peace and obey the law, but it is the civilised way to go.”