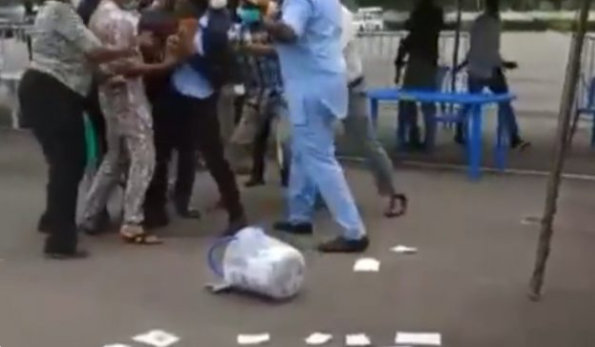 An election organized by the Nigeria Medical Association, NMA, ended in a fiasco on Thursday.

It was gathered that the election, which started in a tense atmosphere, snowballed into medical doctors engaging in a free-for-all.

The botched exercise, which was held at Michael Okpara Square, was meant to elect new executive members of the NMA in the State.

However, as soon as the exercise commenced, warring groups within the Association descended on each other, leading to serious violence.

Policemen providing security during the election had a hectic time trying to restore normalcy as the doctors and their supporters launched violent attacks on their members.

Several doctors were wounded in the process.

Trouble started in the Association a few days ago when the State Chairman, Dr. Ike Okwesili was suspended over some allegations.

In a statement, they had accused Okwesili of unjust withdrawal of the rights and privileges of some members of the association.

He was also accused of suspending other doctors based on misinformation, and was planning to barricade Resident Doctors of Enugu State University Teaching Hospital, ARD ESUT-TH Parklane, from participating fully in the state NMA activities.

”The Chairman, Dr. Ike Okwesili, stands suspended and has been referred to the Ethics and Disciplinary Committee, on account of gross abuse of office by abruptly truncating an ongoing SEC meeting where weighty issues of withdrawal of rights, privileges, and suspension of members were to be discussed, a development that can throw the association into chaos,” the statement read in part.

But the embattled State Chairman, Dr. Okwesili, in his defence, described his suspension as a ruse, alleging that Ugwuonye and co were endangered members of the association under investigation and were working to truncate the NMA State election.