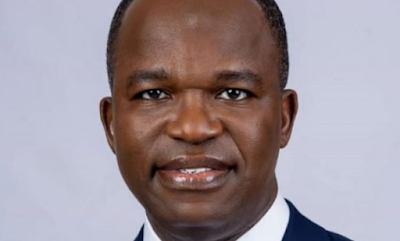 Tokunbo Abiru, chief executive officer of Polaris Bank, has retired after completing his second two-year tenure at the helm of the commercial bank’s operations.

Abiru’s retirement will be effective August 31.

This development is coming after the All Progressives Congress (APC) in Lagos state nominated Abiru as a replacement for Bayo Osinowo, the deceased senator who represented Lagos East senatorial district.

Osinowo, the lawmaker known as “Pepperito” or “Pepper” in political circles, died after a brief illness on June 15.

The Independent National Electoral Commission (INEC) has scheduled the bye-election for October 31.

In a farewell message to the staff of the bank, Abiru said he is looking to contribute his quota in other areas of the society.

He said his administration has improved on the bank’s poor state since he took over as the group managing director of the erstwhile Skye Bank in 2016.

“It gives me great pleasure to say that, with the support of the board, executive management and all of you, we have delivered on the mandate given to us by the Central Bank of Nigeria upon assumption of office in 2016,” he said.

“We have reversed almost all regulatory ratios for good and currently rank amongst the very best in the industry. There can be no better testament to the much-improved state of the bank than the full year 2019 results in which the bank posted a profit after tax (PAT) of N27 billion.

“To buttress the fact that this is sustainable, the bank’s first-half 2020 result showed a PAT of over N18 billion, despite the tremendous headwinds brought on by the COVID-19 pandemic.

“We also commenced the refreshment of the bank’s IT infrastructure, which had largely become outdated and dilapidated due to years of under-investment. As a result of the successful completion of the first phase of the IT Refresh Program, which consisted mainly of an upgrade of the infrastructure and digital platforms, and relocation of the bank’s data centres to Tier III data locations as mandated by CBN regulations and in line with global best practices, the bank’s customers are now experiencing significantly improved service delivery.

“In addition, by introducing and committing resources to the agency banking model, we have contributed in no small measure to deepening financial inclusion for the unbanked and under-banked throughout the length and breadth of Nigeria.

“During this period leading to my final disengagement, I will work closely with the CBN, the board of directors and executive management of our bank to ensure a seamless transition and smooth handover to my successor.”

Before his appointment at Skye Bank, Abiru served in several capacities in some of the leading banks, including being an executive director of First Bank of Nigeria.

Abiru was also the Lagos state commissioner of finance from 2011 to 2013 under the Babatunde Fashola-led administration.