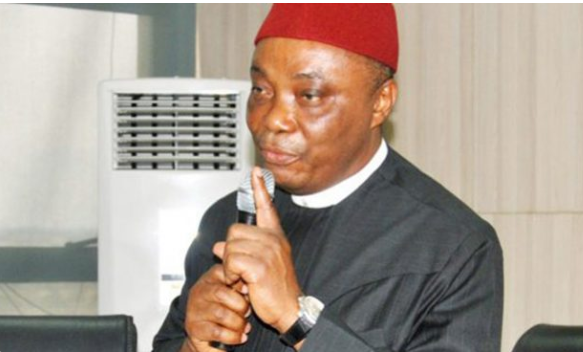 Peter Nwaoboshi, chairman of the senate committee on the Niger Delta Development Commission (NDDC), has dismissed a letter by the agency asking him to refund N2.5 billion.

The commission alleged Nwaoboshi was awarded a N2.5 billion contract to supply plastic desks and chairs to primary and secondary schools in the region.

It alleged that the items were bought but diverted to a warehouse along the Benin expressway.

Godswill Akpabio, minister of Niger Delta affairs, named Nwaoboshi as one of the legislators that got contracts from the commission — an allegation he denied.

In a statement on Friday, Nwaoboshi said the interim management committee (IMC) of the commission is confused because he was initially accused of obtaining a N3.7 billion contract that has now been reduced to N2.5 billion.

The Delta senator said the “charade” by the NDDC could be seen even through the eyes of Stevie Wonder.

Wonder is an American singer and songwriter who is blind from birth. He is known to have made hits in the 1970s.

“Nowhere in the purported letter was it stated that the warehouse, where the plastic chairs were domiciled at belongs to distinguished Senator Peter Nwaoboshi.

“We have always maintained that the IMC of NDDC are a bunch of confused men without vision or direction. Initially, the alleged figure was pegged at N3.7 billion only for the confused IMC team to now come up with a totally different figure of N2.5 billion.

“Nigerians and the entire world could see the charades clearly. Even through the eyes of Steve Wonder!

“However, if the IMC of NDDC feel they truly have a genuine case against senator Peter Nwaoboshi as contained in the purported letter, we are challenging them to go to the law court or make use of every legal procedure available to them.”

The senate panel that probed the NDDC asked its interim management to refund N4.9 billion.