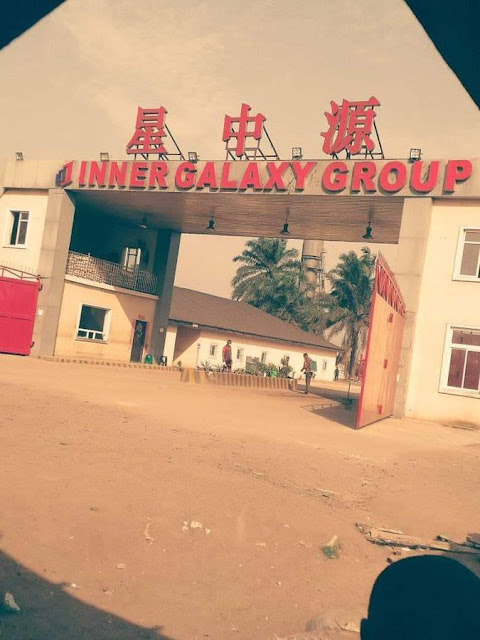 A certain Nigerian with the username @Truthfully83 has taken to the micro blogging platform, twitter to narrate how a Chinese company in Abia State, Inner Galaxy group,  has its over “1000 Nigerians workers  working under the most dehumanizing conditions ever known to mankind”.

He alleged that just like a slave, and a slave master relationship, every Nigerian in that company is mandated to call their Chinese employers MASTER or MISTRESS and failure to do so attracts a direct sack.  Workers are also not given leave, offer or employment letter and are to resume work as early as 6am, & close as late as 7pm daily. Monday till Sunday.

Male Nigerian workers in the company are physically assaulted, while their female counterparts are sexually assaulted, and workers who suffer any injury are not compensated but sacked immediately

@Truthfully83 also claimed that the Abia state Governor, Ikpeazu,  a regular visitor to the company is aware of the various atrocities but has chosen to be silent. The police and army have also been bribed and assist in assualting the workers, most especially the DPO of Obehie police station CSP Isiguzo.
Read his full investigation below:

@fisayosoyombo @segalink, I took my investigations to INNER GALAXY GROUP. A Chinese modern day slave camp, right inside Nigeria.
This company is located at Umuahala, Obuzor Asa, in Ukwa West LGA of Abia State.
My revelation is heart breaking, to say the least. 💔💔 @hartng 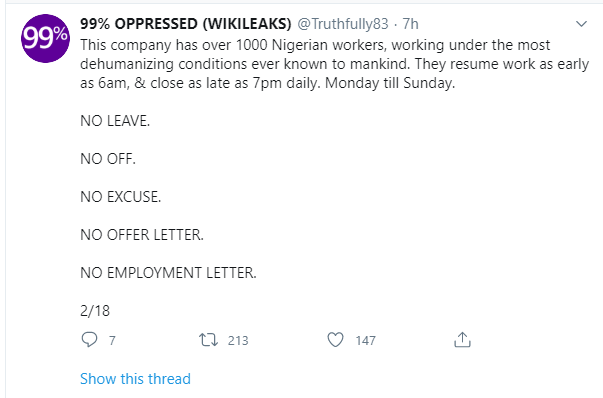 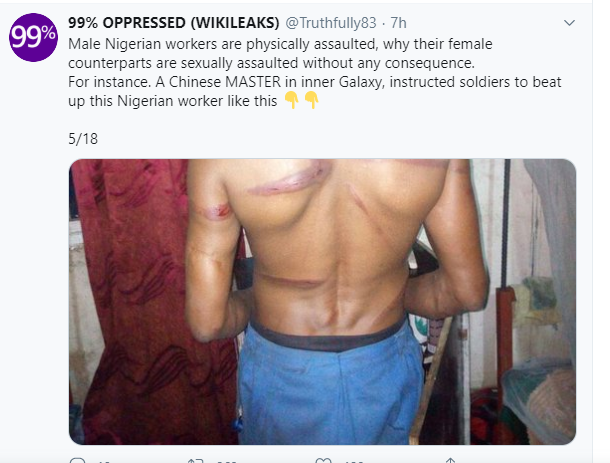 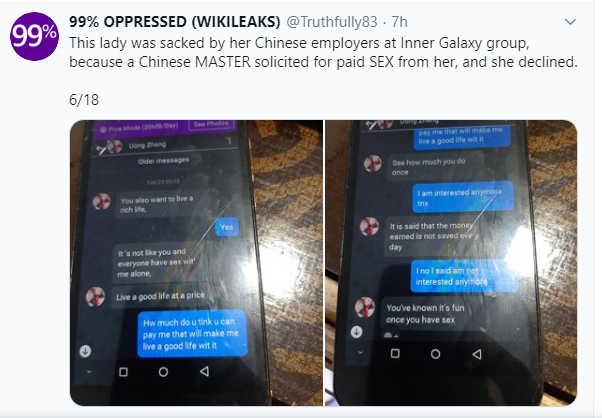 This man was injured right inside the company premises, while on production duty. His foot was amputated, because of the level of damage. Up till this very moment, he has not been compensated, but has long been sacked by the company. 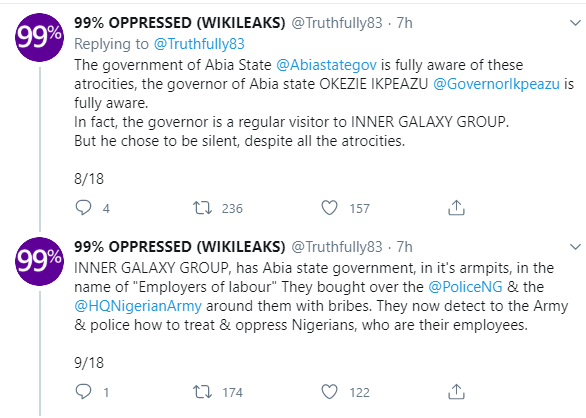 Nigerians are treated worst than second class citizens. The Chinese treat their Nigerian employees as lesser humans in their own soil.

Here is the canteen the company provided for their Nigerian workers, to go have their meals.

See where Chinese employers, Masters and Mistress of Inner Galaxy group do have their meals. I sneaked in a secret camera to capture this. Please compare it to what Nigerians use, and see the difference, for yourself.

Workers are camped in a prison like accommodation provided by the company before now.

It is truly heartbreaking to see what fellow Nigerians, are reduced to. Because of government insensitivity, and the high rate of unemployment. Chinese now feel they are doing us favour, by treating Nigerians as slaves in our own country, in the area of employment.

With the little i know, it is only prisoners that are subjected to these type of dirty environment and accommodations in Nigeria.

Nigeria has failed are citizens, @Abiastategov has failed her people. Okezie Ikpeazu @GovernorIkpeazu is a failure.@hartng

Cameras are allover the company, monitoring activities of workers daily. Workers can not gather themselves for any reason whatsoever. They can't form Union, they can't protest or press on for any demands. The Army Barracks around, is been used at will. Just like police.

Here some workers protested the dehumanizing conditions, they are subjected to daily by Inner Galaxy group. They were rounded up right inside the company, beating up, and sacked.

On a final note, let me state it here categorically that, out of over 1000 Nigerian workers with Inner Galaxy group, it was in June that the company gave 18 employees offer letters. Out of over 1000 workers.

IT IS NOT A GUARANTEE THAT, THEY CAN'T BE SACKED ANY TIME.