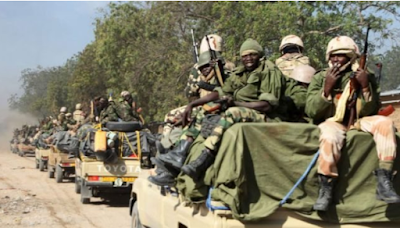 The Multinational Joint Task Force (MNJTF) says a Nigerian nurse has been rescued after an air raid on one of the camps of the Islamic States West Africa Province (ISWAP).

MNJTF is a combined multinational formation of mostly military from Benin, Cameroon, Chad, Niger, and Nigeria.

The freed nurse was said to have been in ISWAP captivity since January.

The insurgents are known to always abduct health and humanitarian workers in the northeast.

Muhammed Dole, a colonel and spokesperson of MNJTF, in a statement on Wednesday, said the release of the nurse was in consonance with the mandate of MNJTF which includes to “facilitate within the limits of its capabilities, humanitarian operations and the delivery of assistance to the affected populations”.

He said the nurse who was incarcerated in one of ISWAP’s strongholds in Lake Chad bolted to safety and freedom, in the aftermath of a joint air interdiction conducted by the MNJTF and national partners.

“After bombs and rockets from the aircraft landed and everywhere exploded in flames, both terrorists and hostages ran for dear life. I had to take my chance. I am grateful to God that I was able to escape,” the victim was quoted to have said.

Dole said the nurse was able to find his way to a village in Niger Republic where he was promptly handed over to security agents in sector 4 of the MNJTF.

He said he was airlifted and handed over to the Nigerian authorities after he had gone through a medical examination to check his health status.

“This is necessary after spending eight months in the horrific and squalid conditions which he had to endure during the period of his captivity in ISWAP enclave,” Dole said.

He also assured the people in the Lake Chad Basin of MNJTF’s “determination to provide security and facilitate development efforts being spearheaded by the respective national governments and international development partners.”