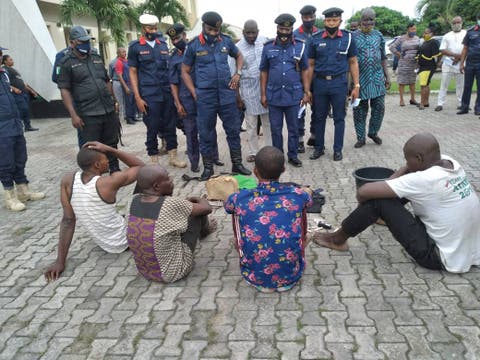 The Nigeria Security and Civil Defence Corps (NSCDC) in Cross River has arrested five suspected cultists in the state with a human skull including mother trying to sell her 9-year-old daughter because a prophetess said she was a witch.

Parading the suspects on Wednesday in Calabar, Mr Danjuma Elisha, State Commandant of NSCDC in the state, told newsmen that the suspects were arrested by officials of NSCDC on Aug. 18 2020, in Ogoja local government area.

Elisha disclosed that the five persons in their custody were arrested through a tip-off when suspected cultists from a rival group had a confrontation.

His words: “On Aug. 18 2020, our attention was called upon concerning a secret cult confrontation at No. 50 mission Road, Igoli, Ogoja.Upon arriving at the scene, our men found a human skull and other bones believed to be human bones.

“The team on the ground decided to swiftly pick the items and persons found within the vicinity for scrutiny.10 persons were picked up and after interrogations, 5 persons were identified to have questions to answer in relation to the items found,” he said.

He further revealed that the four suspects will be handed over to the police for further investigation and prosecution.

One of the suspects, Awka, said that they had a confrontation with a group of cultists that came to attack them in the compound.

He said that it was during the process of the arrest that men of the NSCDC found the human skull in their compound.

In a related development, the Commandant also paraded one Patience Effiong-Udo, 26, for allegedly trying to sell her 9-year-old daughter at Bogobiri area in Calabar.

“Upon a tip-off by a good Nigerian on Aug. 18 2020, our men arrested one Ms Patience Effiong-Udo who went to Bogobiri in Calabar South LGA, allegedly looking for a buyer for one of her daughter’s names withheld, who is 9-year-old.

“Upon investigation, she confessed to the crime and alleged that the prophetess in her church told her that the said Mary Philips was a witch and that she should not stay in her church anymore.

“While she was asking a question on how to sell the child, the person decided to inform us and we swiftly swung into action and picked her.

“In line with inter-agency synergy, we shall be handing over Ms Effiong-Udo to the National Agency for the Prohibition of Trafficking in Persons and other Related Matters for further investigation and prosecution,” he said.

Effiong-Udo said that, it was when she complained to the prophetess that she had no food to eat, that the prophetess encouraged her to sell her child that she is a witch.

She mentioned the name of the prophetess to be “Hannah”, who is in charge of popular old generation church( names withheld) at Itu Okon area of Calabar Municipal LGA.