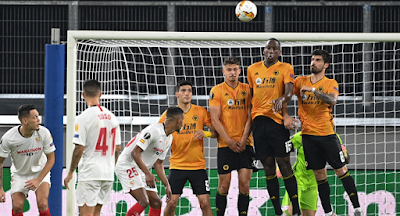 Sevilla and Shakhtar Donetsk qualified for the semi-finals of the Europa League on Tuesday after respective wins over Wolverhampton Wanderers and Basel.

Five-time competition winners Sevilla face Manchester United on Sunday after snatching a last gasp 1-0 win over Wolves, while Shakhtar take on Inter Milan on Monday after easily seeing off Basel 4-1.

The La Liga side made it through to their last four clash with United thanks to Lucas Ocampos’ brilliant headed winner with less than two minutes left on the clock, which ended Wolves’ dreams of European glory.

The Premier League outfit thought they were set to make the perfect start in the 11th minute when Adam Traore set off on a sensational surge towards goal from his own half and was chopped down in the area by Diego Carlos.

However Raul Jimenez, who had scored all of his previous eight penalties for Wolves, sent a weak spot-kick towards Yassine Bounou, who could hardly believe his luck as he batted the Mexican’s tame shot aside.

That was to be Wolves’ last shot on target of the match as chances became hard to come by, although Sevilla began to take a stranglehold on the play and force Wolves back into their own half.

Wolves, who were missing wing-back Jonny after the Spaniard damaged his cruciate knee ligament in the 1-0 win over Olympiakos that booked them a place in the last eight, struggled to get hold of the ball and keep it when they did.

However Sevilla couldn’t carve out many clear-cut opportunities, with Wolves’ defence managing to snuff out their opponents when they did manage to break free.

The first good chance of the second half came when Jules Kounde met Suso’s beautifully flighted cross in the 66th minute, but the Frenchman had to stretch for the ball and sent it looping over the bar.

Eleven minutes later Rui Patrico did well to tip over Ever Banega’s dipping free-kick as Wolves began to rock, but the goalkeeper could do nothing to stop Sevilla’s winner with two minutes left.

Banega was again at the heart of the action, whipping in a fizzing cross that Lucas Ocampos did brilliantly to guide into the bottom corner and send his team into the semis.

In Gelsenkirchen Shakhtar booked their spot in the last four with a commanding win over Basel that will give Inter Milan something to think about ahead of their semi-final clash on Monday.

The Ukrainian side got off to a flyer thanks to Junior Moraes, who headed home Marlos’ corner with less than two minutes on the clock, and they never looked back from that point on.

The match was over as a contest when Taison was brought down in the box, allowing Alan Patrick to make it three from the spot with 14 minutes left.

Shakhtar rounded off a fine display in the 88th minute when right-back Dodo combined with Tete before smashing home a superb finish.

Ricky van Wolfswinkel’s close-range strike for Basel a minute into stoppage time made no difference to a thumping defeat for the Swiss.