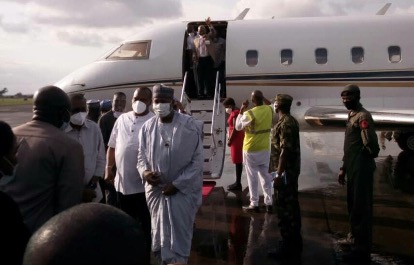 Ahead of tomorrow’s reopening of the Akanu Ibiam International Airport, Enugu, first aircraft has landed on the new runway.

It was gathered that the airport was shut down last year for a major repair.

The project led to the expansion of the runway from one to three kilometres.

At about 5 p.m. today, an aircraft conveying the Minister of Aviation, Senator Hadi Sirika, landed at the airport.

An elated Sirika told journalists that all was now set for the reopening of the airport.

“Yes, the first aircraft landed today, and the minister was on board,” he said while responding to question from journalists.

Also on board the flight was billionaire business mogul, Prince Arthur Eze, who told the media that “we thank President Buhari, this shows that he loves Ndigbo.”