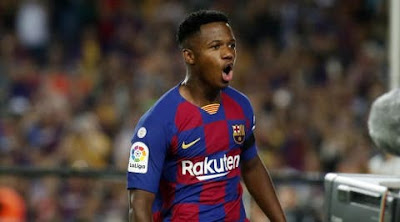 Barcelona wonderkid Ansu Fati looks set to stay at the Nou Camp as the club wants him to sign an unbelievable new contract.

According to Marca (via Mail Online), Club President Josep Bartomeu will offer Fati a new contract with a £360 million release clause.

The clause will prevent Barcelona’s financial rivals, including PSG, Manchester United and Bayern Munich, from signing the youngster at a reduced price.

The offer is a response to Neymar’s £198 million move to PSG back in 2017. The transfer made him the most expensive player in the world after the French club met his huge release clause, something Barcelona officials didn’t expect.

Fati is seen as a future superstar who will help the club going forward once their talisman Lionel Messi retires.

Bartomeu recently signalled his intention to make Fati a Barca legend by revealing that he wants to keep the player ‘for life’.

Speaking to Sport (via Goal.com), Bartomeu said: “There have been no formal offers but there has been interest from some clubs. Barcelona’s answer has been ‘no’.

“He’s essential for the future of the club. Ansu is not for sale. He represents the academy the players come out of, learn from and consolidate themselves in the first team.

“There are not many players like him and Barcelona cannot sell him. What we have to do is help him in his growth and get him to sign a new contract in the future, so that he plays here for life.”

The 17-year-old has had an impressive breakthrough season at the Nou Camp, scoring seven goals in 24 league appearances. He’s also broken numerous records in the process.

However, his contract will expire in 2022, which could entice Man Utd into a big-money move as they’ve been linked with his signature.

Fati is one of several future stars that the Catalonia club currently have on their books. Central midfielder Riqui Puig has played 11 times in La Liga this campaign and could become a first-team regular alongside Fati in the future