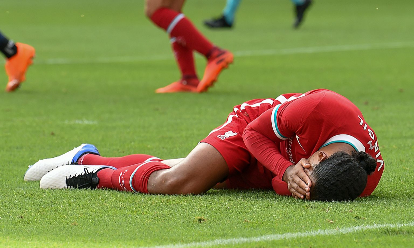 Liverpool manager, Jurgen Klopp, has provided the latest update on defender, Virgil van Dijk’s injury ahead of his side’s Community Shield against Arsenal on Saturday.

Van Dijk was forced off in the second of Liverpool’s 2-2 draw against Red Bull Salzburg on Tuesday in Austria after suffering a cut to his head.

But Klopp is now saying that the center-back’s injury was nothing to be concerned about ahead of the Reds’ clash with Arsenal, adding that the Netherlands captain is not expected to suffer any lasting effects.

“Virg only looks like he has a piercing now and has a plaster on it,” Klopp told Liverpool’s official website ahead of Arsenal’s clash.

“It shouldn’t be, and is, no problem. At the moment, it is, of course, not cool but there will not be a problem.”

Liverpool will tackle Arsenal in the Community Shield on Saturday evening at the Wembley Stadium before kicking off their 2020/19 Premier League title defence against Leeds United on September 12.