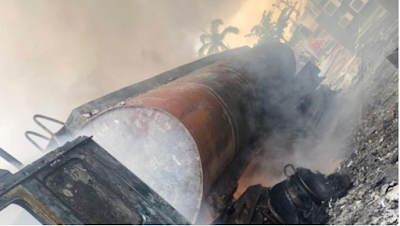 Access Bank has commended Union Bank and the United Bank for Africa (UBA) for their efforts in putting out the fire which broke out in one of its branches in Lagos.

There was a fire outbreak at a branch of Access Bank on Adetokunbo Ademola street in the Victoria Island area of Lagos on Wednesday morning.

The incident happened while a truck was discharging fuel within the bank premises around 10:30am.

In a statement released hours later, Amaechi Okobi, the bank’s group head, corporate communications, said the situation has been brought under control.

He noted that investigation has commenced to ascertain the cause of the fire in order to prevent similar cases in future.

Okobi appreciated Union Bank, UBA, the federal fire service, among others for their support in putting out the fire.

“Investigations have commenced to determine the immediate cause of the fire. Upon completion, the Bank will establish updated protocols to avoid a recurrence of similar incidents,” the statement read.

“In line with our established safety protocols, all personnel (customers and staff) were immediately evacuated to safety. The fire has now been extinguished and there were no casualties recorded.

“While the spread has been contained, customers in the vicinity of the incident who have a need to access our physical branches are advised to visit nearby branches — Adeola Odeku, Muri Okunola and Ajose Adeogun. Alternatively, customers can make use of our digital channels — *901# and the AccessMore app.”