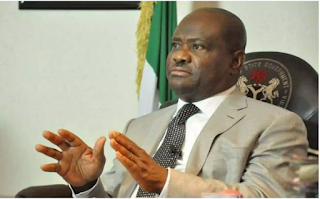 The governor announced this in a statewide broadcast on Wednesday, saying the sack of the permanent secretary would serve as a lesson to others.

Okere was accused of chasing enforcement officers away at a burial where more than the regulated number of persons were in attendance.

“Burial ceremonies are also reportedly being conducted in clear breach of the 50 persons maximum attendance limit, such that a serving permanent secretary had the temerity to chase away officials of the state ministry of health who went to enforce the established guidelines on public burials at Oyigbo,” the governor said.


“As a Government, we are serious with our own responsibilities and those who take our resolve for granted and think that they can undermine our efforts at will without suffering consequences are gravely mistaken.

“Consequently, the permanent secretary, establishment, Mr. Sunny Okere has been relieved of his appointment with immediate effect for flouting and obstructing the enforcement of the guidelines on public burials. This should serve as a lesson to all other public officers who may wish to be irresponsible.

“Appealing to residents of the state, the governor said his government will not relent in its commitment to save lives. He urged the residents to abide by the measures and protocols put in place to fight the spread of the virus in the state.”

“We are closely monitoring compliance with the wearing of face masks in public places, including transport vehicles, and urge residents to strictly comply or risk arrest and prosecution,” he said.

“All supermarkets and related stores and businesses must continue to enforce social distancing and the compulsory wearing of face masks or risk being sealed off.

“A state joint task force made up of security and civilian personnel has been set up to enforce the wearing of face masks in the state.

“We are appraising the prospect of opening our markets to public trading and would do so once we are satisfied that it is safe and proper with appropriate guidelines to enforce social distancing, hand washing, basic hygiene practices, and the wearing of face masks.

“We are taking necessary measures to decontaminate our public schools, protect our children and ensure the safe resumption of schools for terminal classes in line with the federal government’s guidelines on a date to be announced by the commissioner of education.”