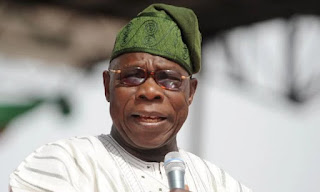 Former Nigerian President Olusegun Obasanjo has been the butt of jokes on Twitter after President Buhari failed to name any of the new train stations in his honour.

According to a statement by the Minister of Transportation, Buhari named the train stations after some deserving Nigerians “who have contributed to the progress and development of their respective communities and the nation at large”.

Missing on the list was former President Olusegun Obasanjo.

In many comments, Twitter Nigeria wondered why Obasanjo was left out, especially since the operative phrase for the honours was: those “who have contributed to the progress and development of their respective communities and the nation at large”.

Read some of the comments:

President @MBuhari has approved the naming of some railway stations along the Lagos-Ibadan and the Itakpe-Ajaokuta-Warri corridors after deserving Nigerian citizens. — HM @ChibuikeAmaechi #Thread
— tolu ogunlesi (@toluogunlesi) July 27, 2020

It's funny how some Nigerians think Obasanjo is a legend. Do you know Obasanjo is the first democratic president yet we have been 'undemocratically democratic' till date, he's done worse than any head of state because he needed to set the precedence in democracy.
— King (@Lawrence2jnr) July 27, 2020

Hmmmm.... By the time OBJ will vex and start writing love letters..... Make Una careful ooo, cos from the way things are going, they will have to rename Aso Rock to settle this matter oh#Obasanjo#Lucy pic.twitter.com/PX6e2wLMIa
— Middle Class Bachelor (@IdisiB) July 27, 2020

Baba Obasanjo will drop a letter soon, but I know say baba Buhari no send am🤣🤣🤣. No time to check time pic.twitter.com/0Kc7NDnpzQ
— Iyalaya (@lollylarry1) July 27, 2020

Obasanjo’s Legal Team on their way to Aso Rock to find out why a station was not named after him pic.twitter.com/Fb48vLmHQy
— MaskUpNigeria (@iameneji) July 27, 2020

Bashir Ahmad, however cautioned that people should not make a fuss over his omission on the honours list: “In my opinion, this “Former President Olusegun Obasanjo’s name was missing as President Buhari named key railway stations after prominent Nigerians” shouldn’t be a big deal, Chief Obasanjo has many things named after him, including one of the popular roads in my State, Kano”.