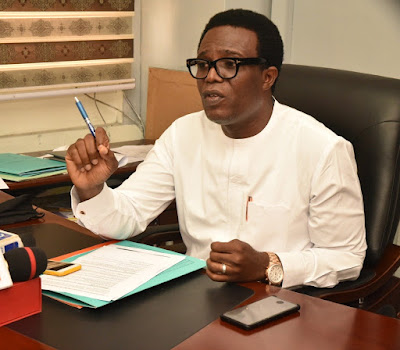 The Acting Managing Director of the Niger Delta Development Commission, NDDC, Prof. Kemebradikumo Pondei, who collapsed at the public hearing by the House of Representatives Committee on NDDC had been sick.

Director, Corporate Affairs at the NDDC, Charles Obi Odili disclosed this in a statement obtained in Port Harcourt.

The statement says Prof. Pondei who had been ill for more than 2 weeks ignored his doctor’s advice to honour the National Assembly.

Odili stated that it was unfair to hold Pondei personally liable for acts which took place when he was not the head of the Commission.


“This morning, his condition deteriorated, and his doctors advised against attending the hearing.

“However, he ignored his doctors’ advice because of the realisation that his traducers will use his absence at the hearing to soil his name and reputation. He thought he could make it through the hearing and take care of his health later.

“As it turned out, his doctors were right. Prof Pondei is in a stable condition at a clinic in Abuja.

“Given this incident, the Commission wishes to make the following points: Prof Prondei became Ag Managing Director of NDDC on February 20, 2020. By May 5, the two arms of the National Assembly ordered a probe of his tenure of exactly 74 days at the time, two-third of which was spent under COVID-19 lockdown conditions.

NEWS:  100 percent increase in train fare is unjust, insensitive - Shehu Sani
“Prof Pondei, as the Managing Director of the Commission, has an official duty to answer for the activities of the Commission like what happened between 2008 – 2012 which is the subject of another hearing based on the auditor general’s report for the period.

“When the two arms of the National Assembly called for a probe, it was over a missing N40 billion. The Commission took the rare step of publishing all payments made by it under Prof Pondei. No organisation in Nigeria, public or private has ever got to that level of transparency in our national history.

“As this publication undermined the claims of his accusers, the subject of the public hearing changed to ‘financial recklessness’. While this might appear insignificant, it amounted to changing the goalposts to smear a clean man. While misappropriation of N40 billion is a matter demanding objective proof, the question of financial recklessness is one open to subjective judgement,” the statement reads.

The Commission who expressed delighted that Hon Olubunmi Ojo, the Chairman of the House of Representatives Committee on NDDC has recused himself from the hearing, suggested that everyone should be made to answer for his role in the misappropriation of the resources of the Commission since its creation.

The statement concluded that the NDDC is participating at the NASS hearing, even though it thinks that seeing to the conclusion of the forensic audit will serve the future of the Commission and the Niger Delta region more than the probe of 74 days of activities.