Don Jazzy gifts lady N200,000 for TV, decoder so she could watch BBNaija 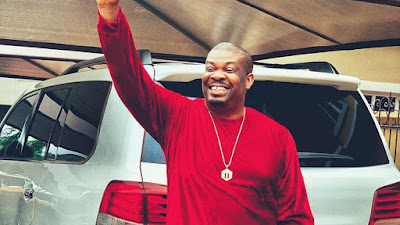 Don Jazzy, Mavin Records CEO, has gifted a Nigerian lady N200,000 after she complained that she couldn’t watch the BBNaija show due to her damaged television set.

Betway, a betting platform, had last week announced the record executive an ambassador for the show’s 2020 edition alongside Ebuka Obi-Uchendu, a media personality who doubles as its host.

Don Jazzy had taken to Twitter on Sunday to remind fans of the show’s kickoff.

The lady however, jumped on the comment section to jokingly ask who is willing to invite her to come and watch the reality show.

Her comment got the attention of Don Jazzy who thereafter asked her to pick a TV on an e-commerce platform and sum that up with the cost of purchasing a DSTV decoder. The record producer later sent her the sum of N200,000 to buy both gadgets.

“Oya pick one television from Jumia and let me know how much. Before you go go end up for person house na later shalaye go enter. You go need dstv too abi? Add the price join,” he wrote.

The 2020 edition of the BBNaija show had earlier raised concerns among viewers considering that it is holding at about the same time when the world is grappling with the COVID-19 pandemic.

The show’s organisers however addressed this by revealing measures put in place towards protecting participants from the novel virus both prior to and during the show’s run time.

All housemates up for the show are to vie for the grand prize of N85 million, within which other benefits are included and ahead of which evictions will emerge as competitions and voting kick in.