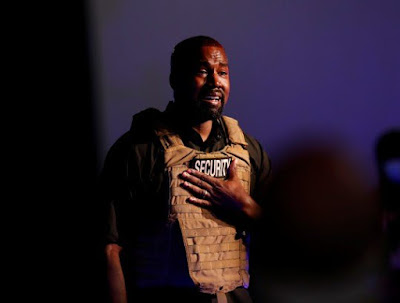 Kanye West, US rapper, on Sunday went emotional while speaking of his abortion experience during his first campaign rally ahead of the US presidential election.

The 43-year-old singer and entrepreneur had earlier announced he would be running in the coming presidential election to hold in November 2020 — a decision that was backed by Elon Musk, Tesla CEO.

During the rally, the ‘Jesus is King’ crooner opened up on how Donda West, his late mother, saved his life when his dad opted for abortion.

West added that he too had considered terminating his first baby with his wife while advocating that new mothers should get $1 million after childbirth.

“In the bible it says thou shalt not kill. I remember when my girlfriend [at the time] called me screaming and crying… And I just thought to myself, ‘Please don’t tell me I gave Kim Kardashian AIDS,'” he said.

“She was crying… and for one month and two months and three months, we talked about her not having this child. She had the pills in her hand.


Kanye West gets emotional while speaking about abortion in South Carolina:

"My Mom saved my life. My Dad wanted to abort me... There would have been no Kanye West."

“And the screen went black and white and God said, ‘if you f**k with my vision I’m going to f**k with yours’. And I called my wife and she said, ‘We’re gonna have this baby’.

“I said, ‘We’re gonna have this child’. So even if my wife were to divorce me after this speech, she brought North into the world when I didn’t want to. She stood up and she protected that child.”

The controversial figure also claimed that Harriet Tubman, a civil rights activist, “never actually freed the slaves. She just had the slaves go work for other white people.”

Kanye said this and I left immediately. I went for a laugh and I got one. But when it got disrespectful for me it was over. pic.twitter.com/nNqjUp03mu
— Toe Knee (@toekneerlynos) July 19, 2020

West also secured just two percent of votes when included in one of the first national polls to be taken since he announced his presidential bid amid reports he would be dropping out of the race for the oval office.