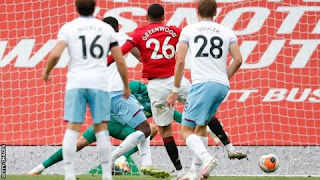 Manchester United need a point from their final game to clinch a Champions League place after coming from behind to draw against West Ham, who confirmed their Premier League survival.

Ole Gunnar Solskjaer's side moved third, a point ahead of Leicester, who they face at the King Power Stadium on Sunday.

But victory for Brendan Rodgers' side will deny the Red Devils a spot in Europe's elite club competition next season - unless fourth-placed Chelsea lose both their remaining games.

Meanwhile, the point for David Moyes' side guarantees Premier League football next season as they now lie four points clear of the relegation zone.


Michail Antonio put the Hammers ahead in first-half stoppage time with his eighth goal in six games after Paul Pogba gave away a penalty when he raised his hands to block a Declan Rice free-kick.

Eighteen-year-old Mason Greenwood levelled with his 17th goal of a stellar first season as a senior player.

Both sides had chances to win it, with under-pressure David de Gea producing a fingertip save to repel a deflected Jarrod Bowen effort and substitute Odion Ighalo turned a near-post effort wide at the other end.

United already knew their efforts to secure a top-four berth would go down to the last day at Leicester. However, the point means that, after being in fifth since February, Ole Gunnar Solskjaer's side have moved back into the top four for the first time since 14 September.