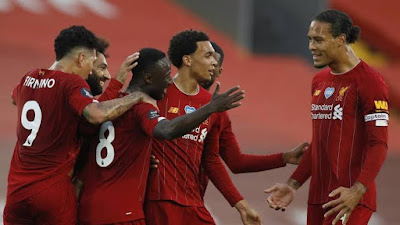 ‌Liverpool set up their trophy presentation as Premier League champions with a thrilling 5-3 win over Chelsea to deny the Blues sealing their place in next season’s Champions League.

Sweet first-half strikes from Naby Keita, Trent Alexander-Arnold and Georginio Wijnaldum ensured a night to remember for Jurgen Klopp’s men was accompanied by a positive result after just two wins in five previous games since they clinched the first title in 30 years.

Olivier Giroud pulled a goal back just before half-time, but Liverpool looked to be cruising when Roberto Firmino’s first league goal at Anfield this season made it 4-1 early in the second half.

The introduction of Christian Pulisic transformed Chelsea on the hour mark as he set up Tammy Abraham then smashed home himself into the top corner to cut the deficit to a single goal before Alex Oxlade-Chamberlain gave Liverpool breathing space six minutes from time.


The defeat sees Chelsea slip to fourth and leaves Frank Lampard’s men still needing a point at home to Wolves at Stamford Bridge on Sunday to secure a place in the Champions League.

Chelsea has already bolstered their attacking options for next season with the signings of Timo Werner and Hakim Ziyech, while they are reportedly closing in on a deal for the 90-million euro ($103 million, £81 million) rated Kai Havertz of Bayer Leverkusen.

But it is at the other end Lampard clearly has to find solutions as they completed an entire league season with just one clean sheet away from home and have now conceded 54 times in the Premier League this season.

A 1-1 draw with Burnley in their last home outing denied Liverpool the first-ever perfect Premier League home record, but they matched the best ever return of 18 wins and one draw to complete three full league seasons without defeat at Anfield.

Despite pleas for fans to stay away on the night Liverpool finally get their hands on the trophy, supporters greeted the team bus on arrival and the Reds looked more like they did for much of the season prior to the coronavirus shutdown.

Keita is one of the very few big-money signings in Klopp’s time in charge not to reach his full potential in two seasons since a move from RB Leipzig, but the Guinean showed what he is capable of by crashing a shot in off the underside of the bar from outside the area.

Chelsea were incensed with the award of a free-kick that led to Liverpool’s second when Mateo Kovacic was penalised for bringing down Sadio Mane. But there no doubt about the quality of Alexander-Arnold’s strike as he curled home his third free-kick of the season, two of which have come against the Blues.

Wijnaldum then smashed into the roof of the net after Chelsea failed to clear a corner before Giroud pulled a goal back at the other end by sliding in after Alisson Becker saved Willian’s initial effort.

The second half was interrupted by the constant crackling of fireworks lit by fans outside the stadium, but there were plenty on the pitch too.

Alexander-Arnold crossed for Firmino to finally end his Anfield drought before Mohamed Salah missed two huge chances to score against his old club.

Pulisic was surprisingly left on the bench by Lampard from the start and he changed the came after he was introduced alongside Abraham and Callum Hudson-Odoi.

The American skipped past four challenges before squaring for Abraham and then fired powerfully into the roof of the net with the Liverpool defence all over the place.

But Chelsea were undone again at the other end as a blistering break from inside their own box saw Liverpool surge forward and Oxlade-Chamberlain smashed home Andy Robertson’s cross at the back post.