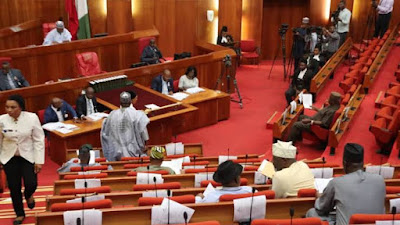 The Civil Society Legislative Advocacy Centre (CISLAC) and the Transparency International Nigeria have called on the upper and lower legislative chambers to stop further approval of loans for the federal government.

Addressing Nigeria’s Senate Press Corps on Tuesday on array of issues which they believed government was not getting right, they said, loans which have been approved were not judiciously utilised.

They expressed concern that Nigeria was being impoverished by Buhari’s government as Ministries, Departments and Agencies of government wastes resources without being checked as well as the lack of oversight function of the legislative houses.

The Executive Director of CISLAC, Auwal Ibrahim Musa who was flanked with officials of Transparency International Nigeria stated that there is no sector in Nigeria which audit has not revealed humongous financial sleaze, a situation, he posited, put the anti-corruption fight as an academic exercise.


The group recalled how they persuaded the federal government to utilise recovered loots, but regretted that, “recovered loots have been relooted”, as reports have now been in the public domain.

“Time and again, Civil Society Organisations and other stakeholders have called for accountability and transparency in the management and utilisation of recovered funds, yet the story remains the same as recovered loots are re-looted.

“We,therefore, called on the leadership of the National Assembly to restrain from further approval of borrowing and mandate the executive to recover misappropriated and mismanaged funds.”